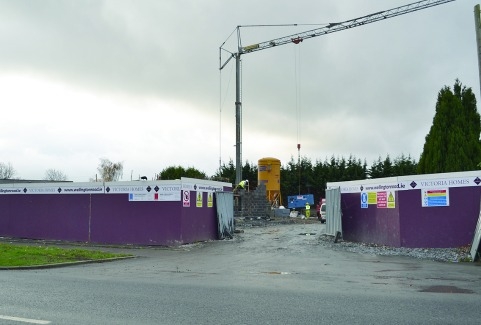 BALLYFERMOT councillors have urged further housing projects to be delivered after development works were launched at Anamore Court last week.

Cllr Smith said: “The policy of the city council and the Department of the Environment needs to be overhauled so that we can build more complexes like Canon Troy. We should be aiming to free up as many houses as possible where suitable.”

Sinn Féin councillor Daithí Doolan applauded the Iveagh Trust for their resilience in pursuing the project.

Cllr Doolan said: “It took five years to get the funding from the Department of Environment for the 70 apartments, but their persistence paid off. It proves that a partnership between the Iveagh Trust and the council can provide essential housing in Ballyfermot.”

Proposals to redevelop the site were first put forward by the Iveagh Trust in 2010.

The site contained 38 bedsit apartments, built to house pensioners in the 1970s, but had not been occupied in recent years as they were unsuitable for present-day needs.

The Iveagh Trust say this type of sheltered housing extends the ability of residents to live independently for longer, dimishing the need for hospital and nursing home admissions.

Hundreds of Ballyfermot people marched on the anniversary of Jonathan Corrie’s death last week in the city centre, demanding the Dáil declare a housing emergency, and implement measures to tackle the crisis.