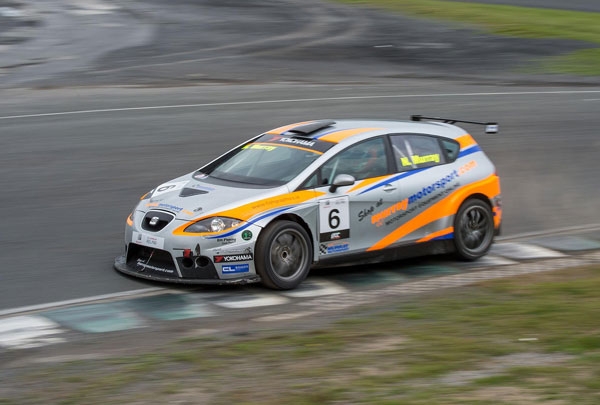 NIALL Murray from Firhouse was back in Seat Supercup Ireland action last weekend hoping to build on his impressive debut in the series last month.

The former Dunlop Motorsport Ireland Young Racing Driver of the Year qualified on the second row for Race One in which he made a good start and challenged for the lead early on.

Yet in an effort to avoid a potential crash, he was sent onto the grass before returning to the track at the back of the field.

After quickly moving ahead of Brian Berry and John Farrelly, Murray found it difficult to pass his team mate Barry English.

Eventually getting through inside the final six laps, he set his sights on Michael Cullen for third, but with three laps to go, he opted to conserve his tyres for the afternoon’s second and final race, and so settled for fourth.

The reverse grid order placed him fourth on the grid for Race Two, and another strong start saw him move up to second as the pack exited Turn Two.

His battle for outright honours with John Farrelly went the complete race distance, Murray being forced to abort an early strong challenge for the lead due to the appearance of a yellow flag on his approach.

From that point on, he opted to secure his second position and strengthen his championship challenge.

“This weekend has been a bit mixed” said Murray. “I definitely had the pace to be on pole but the issue with the car’s handling just cost me that little bit.

“I was unlucky in Race One to fall to the back at the first corner, but I worked my way back up the field” he added.

“We’ve picked up some good championship points so hopefully we can be at the front at the next event” he added.