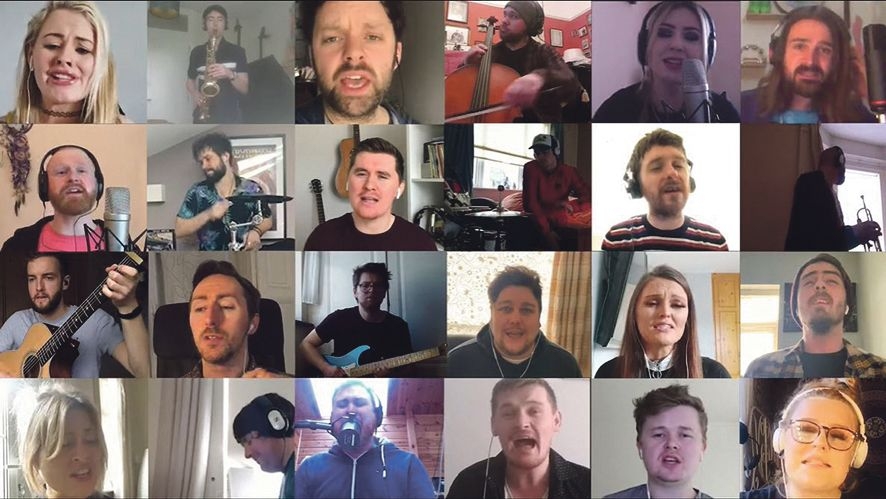 Music video illustrates the power of staying at home

23 MUSICIANS have come together, virtually, to create an amalgamation music video that illustrates the power of staying at home.

Local musician Chris Keeley and his friend Gavin Doyle pulled together some of the best local talent to contribute to their Live and Socially Distant cover of Elbow’s One Day Like This.

Some of the musicans performing in the video

Asking their friends to record themselves performing the song, Chris and Gavin worked for several hours each day for a week to create the 6-minute music video that has an important timely message.

“We wanted to take people away from all of the madness for a few minutes,” Chris told The Echo.

“But also, to remind people to abide by the rules and try enjoy it and to show what the power of staying at home can create.

“Staying home, staying safe is very important right now for the benefit of everyone.

“We can stick together by staying apart.

Members of Morrissey & Marshall and Wild Youth contributed to the piece, with Chris praising the level of local talent.

He added: “I knew what we had was good with the quality of some of the talent around here.

“It started off with a very simple conversation between me and a good friend of mine Gavin Doyle, who deserves half the credit for it, at least.

“I saw a video that James Corden ended his show with last week and we said ‘we can do that, we know enough people’.

Gavin is a master at mixing audio and I’d have enough experience with video, and we started reaching out to musicians asking if they’d want to do it – they all said yes!

“All I asked them to do was record themselves singing the song, then Gav got to work mixing it and I looked after the video.”

The video has reached some success online with many praising how emotional it is.

“When people were recording, we asked them to record it as raw as they are, it was important that it was very raw and natural,” explains Chris.

“It’s exactly what me and Gav wanted. We were only joking the other day saying who’s going to go on and talk to Ryan Tubridy.

“We knew it would do well, the timing of it, right before the Easter Bank Holiday weekend. We just didn’t know it would catch on that quick and that well.

“It’s for everyone. It’s a music video from our homes to yours.”

Watch it now: Live & Socially Distant – One Day Like This.