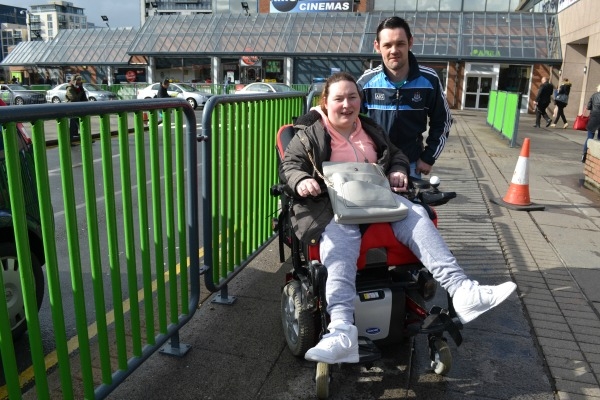 Need a taxi ? Don’t expect one if you use a wheelchair

Richard Redmond and his partner Stephanie Walsh, who is a wheelchair user, told The Echo how they often struggle to find a wheelchair-accessible taxi in the area, and were only this week forced to walk home in the early hours after being unable to find a suitable taxi.

Frustrated by the situation, Richard told The Echo: “It’s hard to get a wheelchair-accessible taxi all week long.

“A lot of taxi drivers who drive a wheelchair-accessible taxi only work from 8am to 6pm, you might get one or two after that time.

“At the weekends it’s so hard to get a wheelchair-accessible taxi because they make more money if they take eight people . . . [and] some taxis don’t have any ramps even though they class themselves a wheelchair accessible taxi.”

He added: “It’s very difficult, especially when we are on a night out and, for example, on Sunday last we were out in the Old Mill in Tallaght and myself and the staff rang up all of the taxi companies around Dublin and we all got told “no” or it’ll be an hour or two.

“The Old Mill staff kindly stayed open until we got sorted but we decided to walk home at 2.30am . . . and we felt unsafe and annoyed because people can just jump into a taxi and go home.”

Richard and Stephanie both stressed that it’s much easier to get a wheelchair-accessible cab in the city centre than out in suburbs like Tallaght.

Stephanie told The Echo: “Basically most of the time I find it really difficult to live my life day to day, which I find really upsetting – and sometimes I find myself invisible to others.

“People in wheelchairs should have the same rights as everyone else . . . [and] I have just had enough. Things need to change drastically.”

“That is to say only wheelchair-accessible vehicles will be granted a new licence.

“The 2016 Wheelchair Accessible Vehicle Grant Scheme opened on April 1, 2016. Information relating to this grant is available in the “Forms and Guides” section of our website.

“€750,000 is available on a first-come, first-served basis. Any Provisional Grant offer will only be valid for 3 months from issue, until 30 November or until funding is depleted whichever is the earlier.”