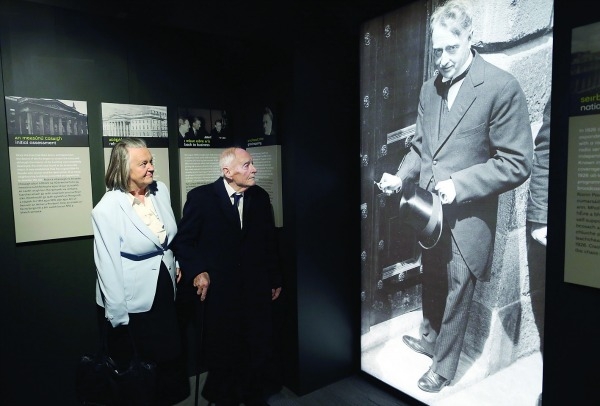 FORMER Taoiseach Liam Cosgrave came face-to-face with a larger than life-size image of his late father W.T. Cosgrave, during the opening of An Post’s GPO Witness History visitor centre.

Cosgrave (95), a Knocklyon resident, admired, with his daughter, a photograph of his father – Ireland’s first Taoiseach – during a visit to the opening of the history centre.

The new centre is one of the State’s permanent 2016 ‘Reminder’ projects for which the Department of Arts provided funds of €7 million.

It has special effects, soundscapes, and heartfelt stories of real people in extraordinary circumstances to captivate visitors.

His time as Taoiseach was not an easy one. Although he managed to ensure Ireland became a member of the UN and foster good working relations with Europe, his conservatism and position on contraception and austerity policy damaged the government at the time.

For details on the An Post GPO Witness History centre, which is open seven days a week, visit www.gpowitnesshistory.ie

NEWER POSTStudents unravel the mystery of the science behind super-heroes
OLDER POSTTrading as normal, Belgard Inn says, despite Lidl plans