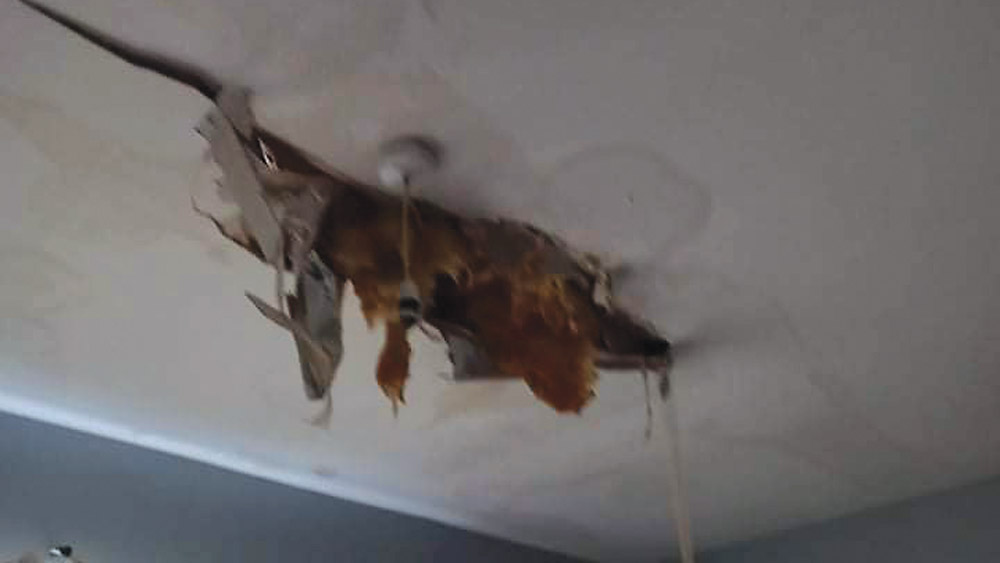 The ceiling in the bedroom collapsed

A SINGLE mother has described the difficulty that her family is having living in a mouldy, damp house in Balgaddy, saying the family is “always sick” because the property is “Baltic”.

Between 2004 and 2007, 448 homes were built in Balgaddy, Lucan and many residents in the scheme have complained of mould and dampness.

In 2015, residents in the estate took a collective complaint to the Council of Europe arguing that the social housing stock was below living standard.

The European Committee for Social Rights in Strasbourg upheld the complaint, saying the Government “failed to take sufficient and timely measure to ensure the right to housing of an adequate standard for a not-insignificant number of families”.

Tenants continue to say that the serious structural problems have led to years of leaks, damp, mould and electrical deficiencies.

One such resident, Maria Daly, is living in the property for the last eight years and has experienced hordes of issues.

The mother-of-three has been seeking a transfer for the last two years as living in the property has taken its tole on her family’s physical and mental health.

“When it rains outside, it’s like it’s raining in the kitchen because the water comes streaming in through the fire alarm and there’s three holes in the kitchen ceiling,” Maria tells The Echo.

“That’s a major fire hazard. The ceiling in the bedroom collapsed in April this year and it ruined my bed.

“When the council were out fixing the roof, they said they’d replace the bed for me, but I haven’t heard anything back.

“Every time I call, I’m getting passed around from pillar to post, and I don’t owe a penny in rent.

“There is slugs that are getting in under the bedroom door because the gaps under the doors.

“Even when I’m heating the house, it just goes straight out the hall door and out the balcony door. 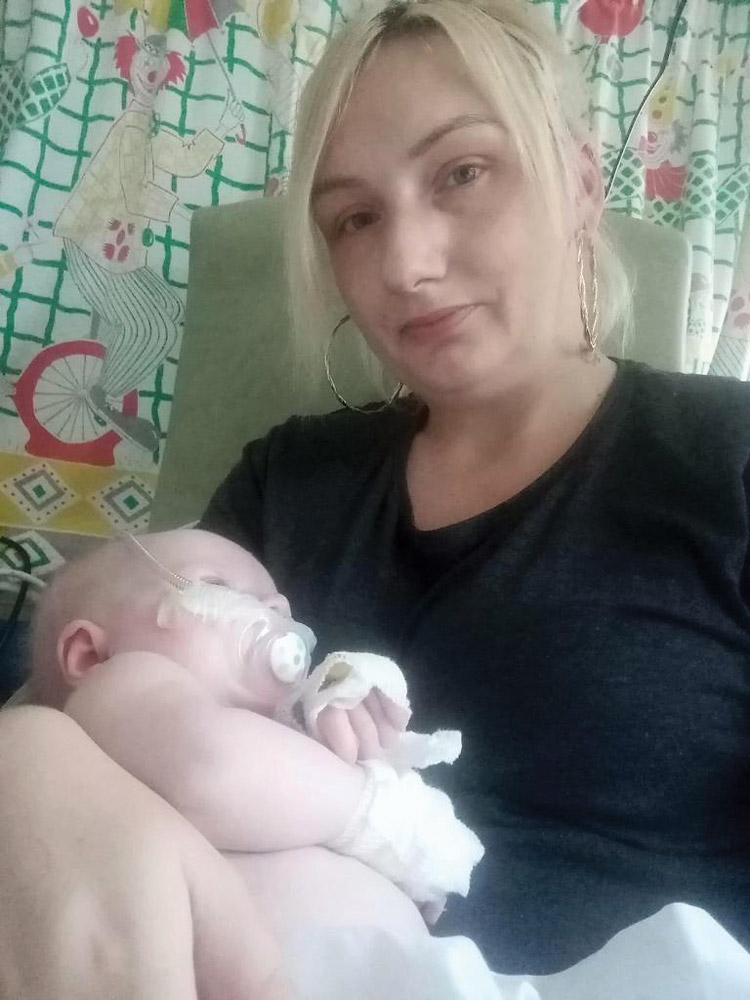 Maria Daly when her baby Lauren was hospitalised for breathing issues

“The doors and windows are ridiculous, you can’t hold the heat in the house.

“The back bedroom is so bad with the mould, we can’t stay in it. I’ve been living in my sitting room with my two kids for the last two years because of it and my 16-year-old is in the other bedroom.”

In 2019, as reported in The Echo, South Dublin County Council committed to an accelerated maintenance programme which will, where necessary, provide window and door replacements.

Maria’s property in Foxdene is yet to receive new windows and doors, and is still in need of remedial works.

The 35-year-old claims to be on the council’s transfer list, she previously had a transfer fall through and feels like she is “trapped” in her house.

“I’m just sick of it, I really can’t go on like this anymore and I don’t know what to do. 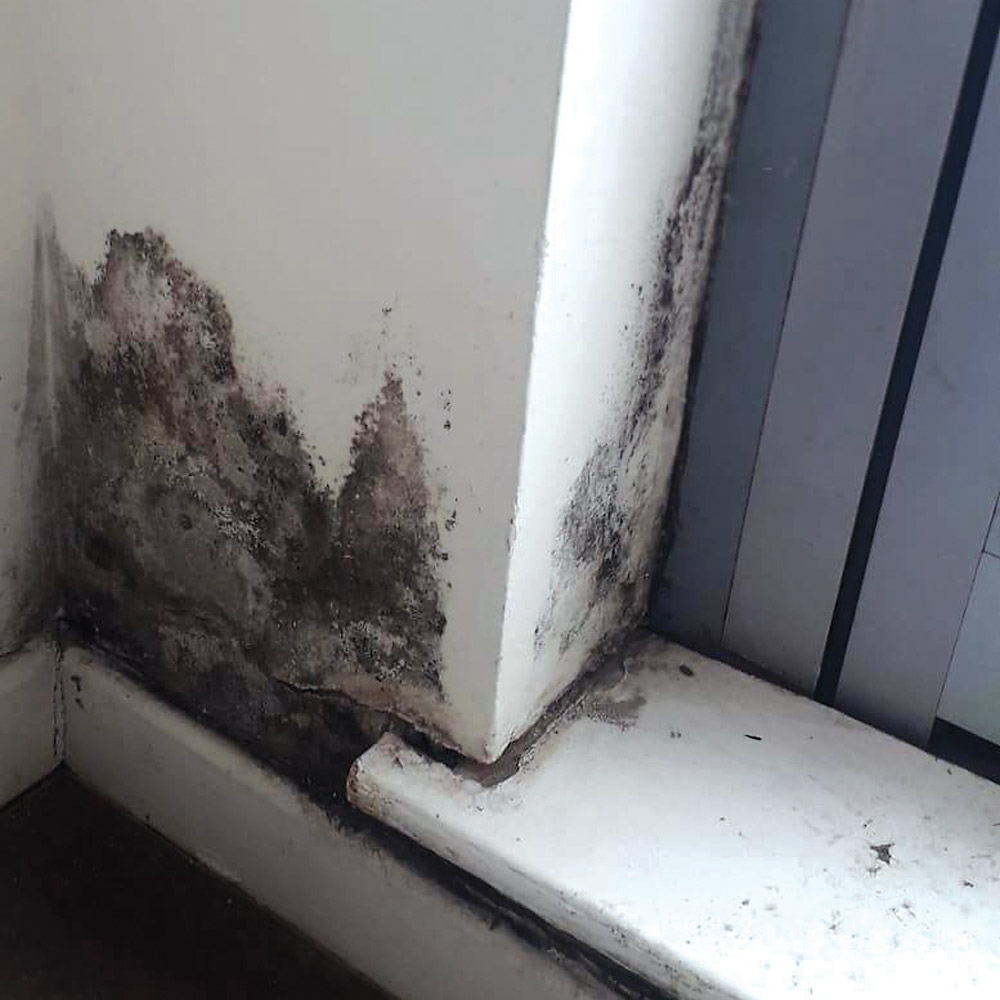 Dampness on the walls

“This is so wrong, it’s not even me I’m worried about, it’s my three kids.”

Maria and her three children, aged two, five, and 16, are going through waves of illnesses – which she claims are brought about through her social tenancy.

“Even this week, my youngfella is out sick from school again, we’re always sick because it’s Baltic in this house,” Maria details.

“When the baby was six-weeks-old, she was hospitalised in the Coombe with her breathing it was that bad. It was horrible, I could see her struggling to breath.

“When I brought her home, within a few days, I was brought to hospital in an ambulance because I got pneumonia living there.

“My 16-year-old has really bad asthma and with the damp and mould, it’s so bad.

“How can we be expected to live like this? I’ve been waiting for a transfer for two years, but we’d be sooner taken out in a coffin than moved.”