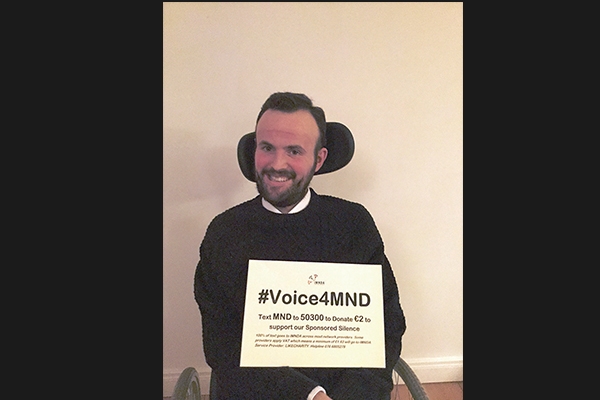 To highlight this Padge Kelly from Lucan wants people to take on a 30-minute Sponsored Silence during the month of February.

Patrick (Padge) Kelly (28) was diagnosed with MND in 2003 when he was 17. When he was in sixth year in school he noticed that his hand writing had become very messy and that he wasn’t as fast when he played football. One day when he was walking home from the shops with his Gran he found he couldn’t carry the bags for her.

He said: “I went from a limp to needing a crutch to a wheelchair. I can’t move my arms or hands. The worst of all is that my tongue, mouth and diaphragm has also been affected which robbed me of my speech.

“I could deal with being disabled, but not being able to communicate with family and friends was difficult to come to terms with”.

This month the Irish Motor Neurone Disease Association is are asking people to take on a sponsored silence to experience what life is like for Padge and other MND sufferers.

How would you cope not being able to communicate? Just pick a day, time and location where you will take on your sponsored silence and then contact the IMNDA fundraising@imnda.ie or 1800403403 for your Silence Sponsor pack.

People can nominate friends and families to join them. Sometimes silence can speak volumes. Take on the challenge today to raise vital awareness and funds for the IMNDA.

NEWER POSTThis week is all about Valentine beauty and layering!!!
OLDER POSTIT Centre closure is a ‘tremendous loss to the community’