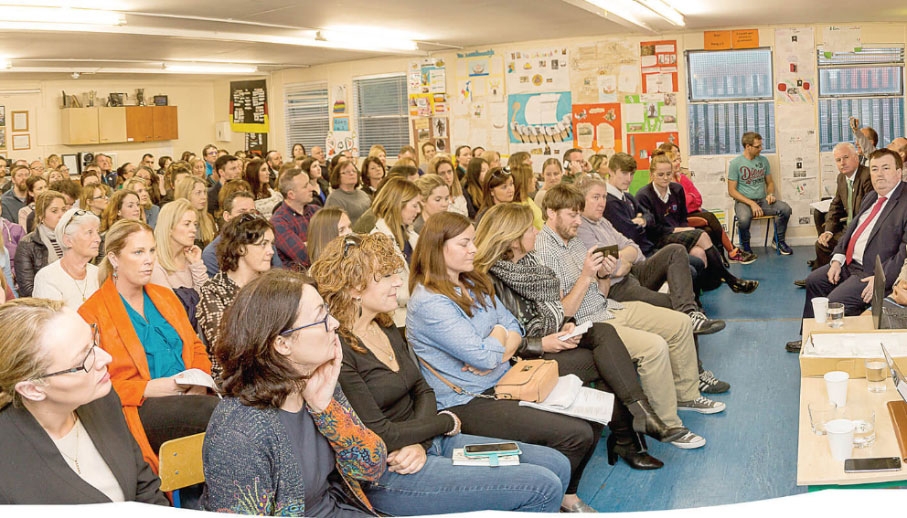 Parents voice concerns over lack of progress with school

LOCAL TDs attended a school meeting which was held by people from a local Gaelscoil on Tuesday, who are calling for the government to construct a permanent school building as the school has been housed in prefabs for the past 21 years.

Gaelscoil Chnoc Liamhna in Knocklyon currently has 245 pupils, who attend classes in the school’s 16 prefabs, and last October pupils, teachers and parents from the school gathered outside the Dáil with placards urging the government to build a permanent building for the school.

The school held a meeting on Tuesday, where parents and teachers voiced their concerns about the “lack of progress” for the development of a permanent school building.

Parents expressed their frustration at the meeting, wondering why the school had been “forgotten” and questioning why the voluntary contributions that the parents pay to the school are used to repair prefabs “that are not worth fixing”.

Trish McGinley from the Gaelscoil Chnoc Liamhna New School Committee said: “Our campaign for a permanent school building has energy, commitment and a very loud voice.

“Our campaign will remain active and energised until we get what all the staff and pupils – past and present – in Gaelscoil Chnoc Liamhna deserve.”

Sharon Walsh, co-chair of the school’s parents’ committee and part of the new school committee, told The Echo: “For years departments have hidden behind the fact there was a land issue with our site, that was resolved in June 2017.

“Gaelscoil Chnoc Liamhna will not accept any more excuses or broken promises, our children and the staff deserve a school made of bricks.”

A spokesperson for the Department of Education and Skills told The Echo: “Gaelscoil Chnoc Liamhna is on the department’s Six Year Capital Programme.

“The department is fully committed to delivering a new school for Gaelscoil Chnoc Liamhna  as soon as possible and is in regular contact with the school.

“The department has been working with the local authority to acquire the site on which the school is currently located in order to facilitate the development of a permanent building for the school.

“The site acquisition has been agreed. The Chief State Solicitor’s Office, acting on behalf of the department, is currently progressing the acquisition through the conveyancing stage.

“The department is also currently finalising the project brief to facilitate the advancement of the project into the architectural planning process.  This is to ensure the project moves as quickly as possible

“All parties are working to advance this project as quickly as possible.”