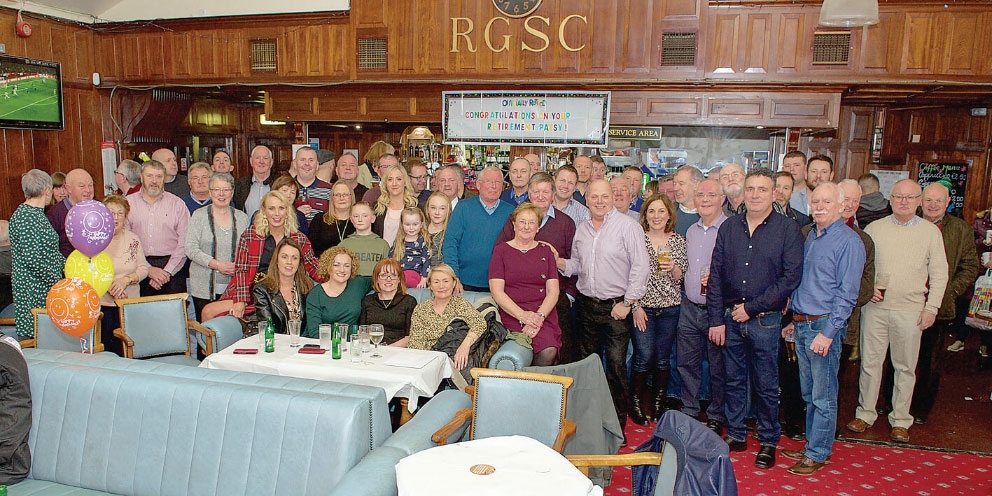 Patsy retires after 47 years from ‘dream job’ in county council

A SOUTH Dublin County Council worker had a retirement party in the Roadstone Group Sports Club after working for the local authority for exactly 47 years and three months, in what he said was a “dream job”.

Brittas man Patsy O’Donoghue (66) worked his last shift with the local authority on Tuesday, January 22, where he worked as a supervisor in the water maintenance department.

Patsy O'Donoghue with family and friends at his retirement party

Patsy started working as a water inspector for South Dublin County Council, before rising through the ranks and getting promoted to the role of supervisor, and is held in high esteem by his colleagues.

Brendan Kelly, an assistant foreman in the council’s water maintenance department who has worked with Patsy for the past 40 years, told The Echo: “Patsy is brilliant, he’s an absolute gentleman.

“In hail, rain, or snow, if anyone was in trouble, Patsy was your man, he was there.

“He has the whole water network in his head – he knows everything, his brain is like a computer.”

Patsy thoroughly enjoyed his time working for the local authority, and he told The Echo he was initially reluctant to retire.

“You keep saying to yourself that you have to retire sometime,” he explained. “I’m the sort of person where if I didn’t have to retire I wouldn’t, they would’ve had to carry me out in a box!

“It was more than a job, it was probably more of a way of life.

“Whenever someone didn’t have water, we had to make sure they got it back.

“We maintain the supply throughout the whole of South Dublin county – we were constantly on the go.”

Patsy’s family, friends and colleagues gathered in Roadstone on Friday (January 25) to celebrate the family man’s retirement, and Patsy is looking forward to spending more time with his family, including his wife Margaret, his children and his grandchildren, and also travelling during his well-deserved retirement.

“I’ve a few holidays lined up, and I’ll be going on a Mediterranean cruise in May,” Patsy told The Echo.

Reflecting on his time spent working for South Dublin County Council, Patsy said it was “a dream job that I had for a dream amount of time”.