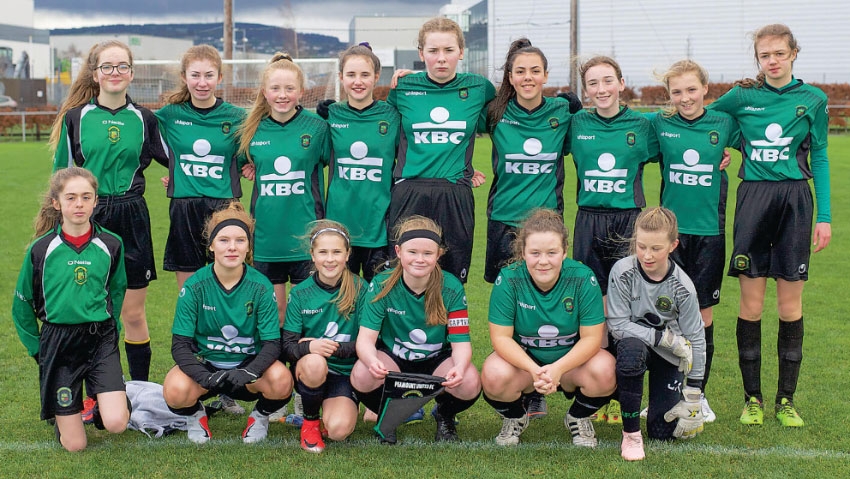 Peamount U14 girls march on

PEAMOUNT United secured their place in the All-Ireland Under 14 Girls Cup quarter finals following a 5-3 victory over Holy Cross, Limerick in Greenogue on Sunday.

The Newcastle side was full value for their win having raced five goals in front, and it was only after a few changes were made to personnel that Limerick made a late surge.

Emily McCann got the hosts up and running after just seven minutes when she finished off a good move through the middle of the park that involved Lorena Di Stefano and Nadine Raymond.

A neat one-two with Leah Kelly then set up McCann for her and Peamount’s second before Sadhbh Fisher rifled home a third before the halftime break after a corner from Raymond had found its way to her just outside the box.

The homeside maintained the momentum after the break with Fisher making it 4-0 from the penalty spot before Jessie Stapleton wrapped up their scoring.

The Peamount substitute was on the pitch for only a minute before taking possession and weaving her way around two challenges and shooting home from just outside the box.

Holy Cross did rally later after a number of changes were made to the Peamount side, but time was not on their side and it was the hosts who progressed to the last eight.

The club’s win in the All-Ireland Under 14 Cup came just hours after the Peamount Under 16 Girls also reached the last 16 of their respective competition following their 5-0 demolition of Donegal outfit Cockhill also in Greenogue.

While she completed the scoring for the Peamount Under 14s, Jessie Stapleton opened proceedings for the Under 16s when she mopped up a loose ball that had been parried into her path following Orla Fitzpatrick’s initial strike.

It was the only score in the first half, but Peamount opened the floodgates in the second, starting with another strike by Stapleton.

Maria Reynolds made it 3-0 when she unleashed a low strike from the edge of the box before Ava Cullen vollied home a fourth after Fitzpatrick had found her with her pull-back to the far post.

Milly Davy-Kelly then steered home the closing score under the Cockhill goalkeeper following some fine work by Toni Ceno.

Winners of the All-Ireland Under 14 Cup last season, this Peamount United team will be very encouraged by their start to the Under 16 competition.

What’s more this side boasts four players in the latter stages of trials for the Ireland Under 15 Schools international squad.