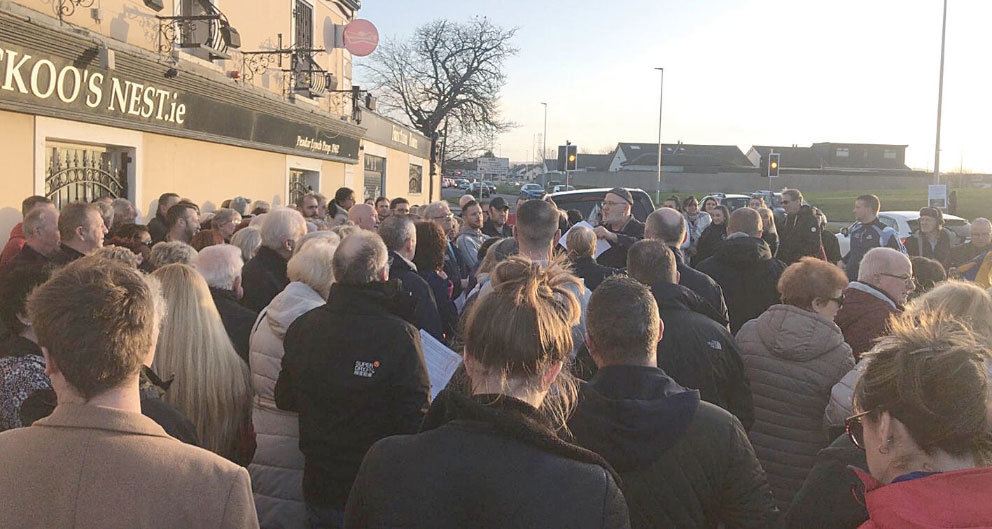 ‘People want the Cuckoo’s Nest pub back in the area’

LOCAL residents gathered at a street meeting in front of The Cuckoo’s Nest pub on the Greenhills Road last Saturday, where people signed a petition against plans for the demolition of the landmark pub to make way for a four-storey apartment block.

The plans are currently being considered by South Dublin County Council, after the developer, Legendstand, submitted an application for a modification to their permitted planning permission for the development of a new housing estate, Temple Woods, beside the pub.

The houses in Temple Woods are now all occupied, and at viewings potential buyers were given brochures which mentioned plans for a gastropub in the place of The Cuckoo’s Nest, which the developer had received planning permission for.

However, Legendstand submitted an application in January seeking permission for the demolition of The Cuckoo’s Nest and the construction of 11 one-bed and 15 two-bed apartments in a four-storey apartment building in its place.

The plans have caused disquiet in the community, with a well-attended public meeting being held last week and a number of objections being lodged on the plans.

On Saturday afternoon, local Solidarity councillors Mick Murphy, Kieran Mahon and Brian Leech, and Paul Murphy TD, outlined their joint objection to the plans and gathered over 200 signatures for a petition which they will be submitting with their objection.

Tommy Kenny from the Temple Woods Residents’ Association told The Echo: “The atmosphere was really positive, it was about raising awareness about what’s going on.

“The closing date for submissions on the plans is this Monday, and hopefully we’ll do enough regarding quantity and quality [of objections] to make the planners sit up and reject the application.

“We want to keep the momentum going.”

The Temple Woods Residents’ Association’s objection to the plans cites alleged “developer misrepresentation” as one of their reasons for objecting, as the development of a gastropub at the site of The Cuckoo’s Nest was mentioned in the brochure that was given to potential buyers.

The potential for issues with parking and traffic in the area if the apartment development gets the green light have also been stated as concerns within the residents’ association’s objection.

Solidarity councillor Kieran Mahon told The Echo: “We’re saying that the planning needs to go ahead as is with the pub being reinstated.

“People want The Cuckoo’s Nest back in the area, it has historical and social importance in the community.

“People are keen for the project to be finished and for the pub to be in place as per the planning permission.

“Our sense is that it would be overdevelopment [if the apartment development went ahead].”

Submissions are being accepted on the plans until Monday, March 4, with South Dublin County Council reaching a decision by March 25.