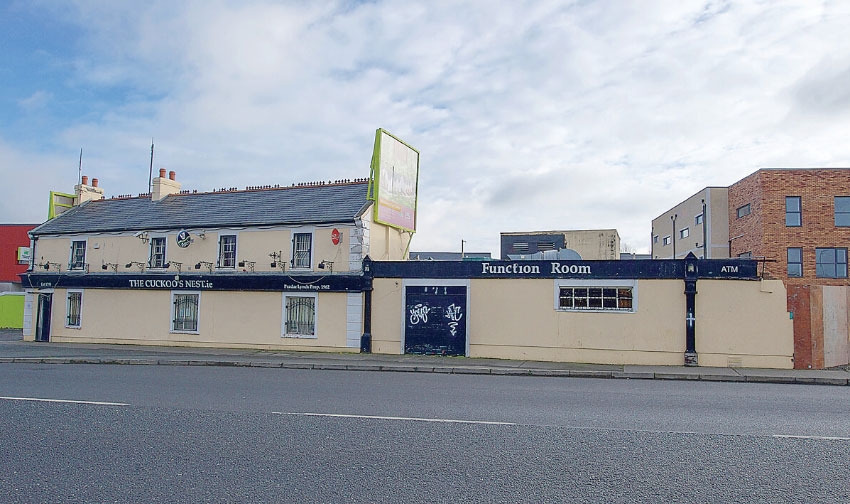 Petition started to ‘save the Cuckoo’s Nest’

A PETITION has been started to Save the Cuckoo’s Nest, after a planning application was lodged with South Dublin County Council seeking the demolition of the pub to make way for an apartment block.

As previously reported, a new planning application lodged with South Dublin County Council on January 14 sought the ‘modification’ of the original planning permission for the Greenhills Road site.

The Cuckoo's Nest on the Greenhills Road

The planning application sought permission for the ‘demolition of the remainder of the existing public house and in its place, the construction of a four-storey apartment building’.

In late January, the application was deemed ‘invalid’ by county planners, as the newspaper notice did not comply with planning and development regulations.

However, in the past week, applicant Legendstand has resubmitted the application, which seeks the demolition of the Nest and the construction of 11 one-bed and 15 two-bed apartments in a four-storey apartment building.

The application also seeks permission for the retention of an existing cellar underneath the pub, which will be used as a plant room for the proposed apartment building.

The housing estate Temple Woods has since been completed, with people moving into the new development.

The original planning permission also provided for alterations and renovations to the existing pub and the demolition of Tallaght Theatre, which has since been reconstructed in the north-west corner of the site.

In response to the new planning application, which seeks the ‘modification’ of the original permission granted, a petition called ‘Save the Cuckoo’s Nest Pub’ has been created.

According to the petition: “The pub has been on the site since 1739 and has been a significant part of the local community both from a social and historical point of view.

“Recently a planning notice was erected on the pub outling a planning application to develop 26 apartments on the limited site, which would mean knocking of the [Cuckoo’s Nest] structure that means so much to many in the greater community.”

The petition aims to “highlight the importance” of the structure to South Dublin County Council and its planners, with the ultimate aim of “saving the structure from demolition”.

A decision by South Dublin County Council is due by March 25.

The residents of Temple Woods are also holding a meeting in St Kevin’s Family Resource Centre on February 18 from 7pm to 9pm.

Residents from Kilnamanagh, Tymon and the wider community are invited to attend.

Further details on the petition can be found HERE.