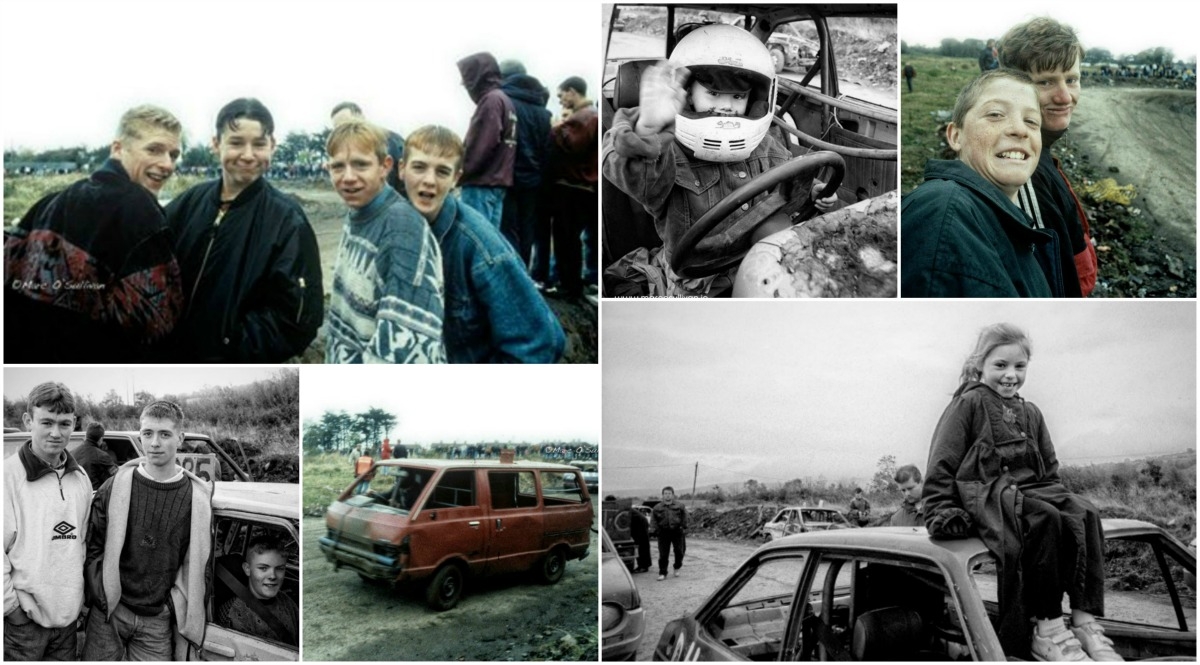 PICTURES: The story of the Tallaght rally track told by the community

KILLINARDEN took a high-powered trip down memory lane this week, when forgotten photographs of a community-driven, racing track were found.

The black and white pictures were recently uploaded onto Facebook by Dublin photographer Marc O’Sullivan, who remembers cycling out to Jobstown or Killinarden one Sunday morning in the mid-nineties to take images of a community-led racing track that was set-up to combat the issue of joyriding – other than that, Marc’s recollection was sketchy.

However, after The Echo posted the images on its website HERE, seeking the community’s support in telling the story behind the shots, an amazing and important piece of social history was revved back to life – one which reflects the can-do attitude of Tallaght residents and their responsiveness to issues.

After speaking with a number of people across the community, The Echo learned that the race track was the brainchild of resident Catherine Tynan, who has since passed away, and Father Liam O’Brien – who, alongside a number of local people, developed the race track in 1993 at the top of Killinarden, where Hazelgrove estate and Scoil Caitlin Maude now stand.

David Smith, who grew up in Knockmore and now lives in Avonmore, told The Echo: “Father Liam and Catherine came up with the idea and they approached a few of us young lads in the area who had been racing over at a track in Santry to help them set it up.

He added: “There were rules and if anyone was caught in a stolen car, or acting the eejit around the estate, they weren’t allowed to race on the Sunday and it did work, joyriding calmed down in the area.

“It also created great community between the kids, everybody was helping each other, fixing cars and trying to get as many cars ready for the track.

“It went on for about the guts of two years [1993 to 1994] and so many people in the area helped out, we had flag men, someone to remove the cars off the track after . . . it was a real community effort.

“In the end, the track kind of just fizzled out and then the council moved in.”

The images of the Killinarden race track came to light when photographer Marc O’Sullivan was going through old film.

“I came across the picture of the two boys smoking in the car, which was always a favourite of mine, so I decided to scan all of the images,” Mark said.

“Looking at the photographs, it was pretty amazing to see how living in Ireland in the mid-nineties was like living in a different time.

“Plus, nobody had camera phones then, which makes the images more special for the community and those in them.

“I remember that day was a horrible day, it was a cold, dull day and the light was really bad.

“However, despite the weather there were hundreds of people there and an ice-cream van

Alongside bringing the community on a nostalgic ride, some members of Killinarden believe that we could, today, learn from the spirit of the past.

Hilda Hamilton, Killinarden Community Council, told The Echo: “Catherine Tynan and Father Liam were very pro-active and this track gave the young people an outlet and brought the community together.

“I think everything is circular and the issue of joyriding and burnt-out cars is back on the agenda, and is an issue in communities again.

“We could learn a lot from the past and the impact this track, and engaging with young people, had on reducing joyriding in the area.”

The Echo would like to thank Marc O’Sullivan for sharing the images and everybody who helped us, both online and in person, in telling the story behind this nostalgic piece of Tallaght history.

Since posting the original pictures Marc has forwarded us several colour photos which you can see below.