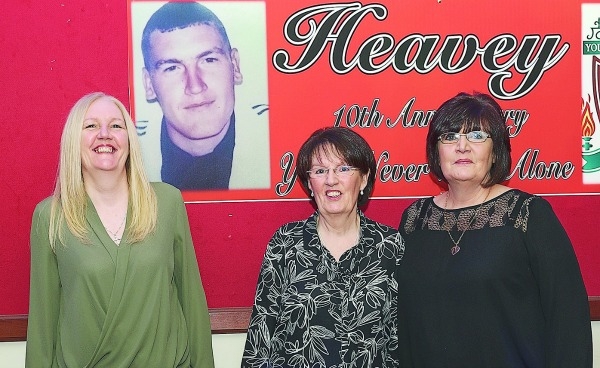 Pieta House is an important service for the community

A MEMORIAL service for a man who passed away ten years ago took place in the Ballyfermot Sports and Social Club on Friday.

After the tragic death of Ballyfermot man Jonathan Heavey in 2006, his friends banded together to secure vital suicide and self-harm prevention services in the area.

The group met Pieta House founder Joan Freeman and this led to the introduction of Pieta House services in Ballyfermot – at Canon Troy House and Mount La Salle.

On Friday, the event raised €2,260 for Pieta House, and a prize of two tickets to see Manchester Utd in action will push the total towards the €3,000 mark.

A plaque is dedicated to Jonathan Heavey in Canon Troy House, which is a “nice memorial”, according to his friend Robert Quigley.

Robert said: “It was a great turnout – even better than we thought it would be. Jonathan’s mam, dad, sisters and uncles and aunties attended. They attend the event every year.

“We still have the Man Utd v Watford (Premier League fixture March 2) to sell, and that includes boat, coach, tickets. There were a lot of Liverpool fans on the night, so we wanted to get the best value for them!”

Cllr De Roiste said: “We lost our friend in 2006 and were trying to make sense of it. Pieta House was a fledgling charity at the time – it seemed like the perfect vehicle for the area.

“It’s an important service for Ballyfermot. There is a waiting list, the place is very busy, but they never turn anyone away.”