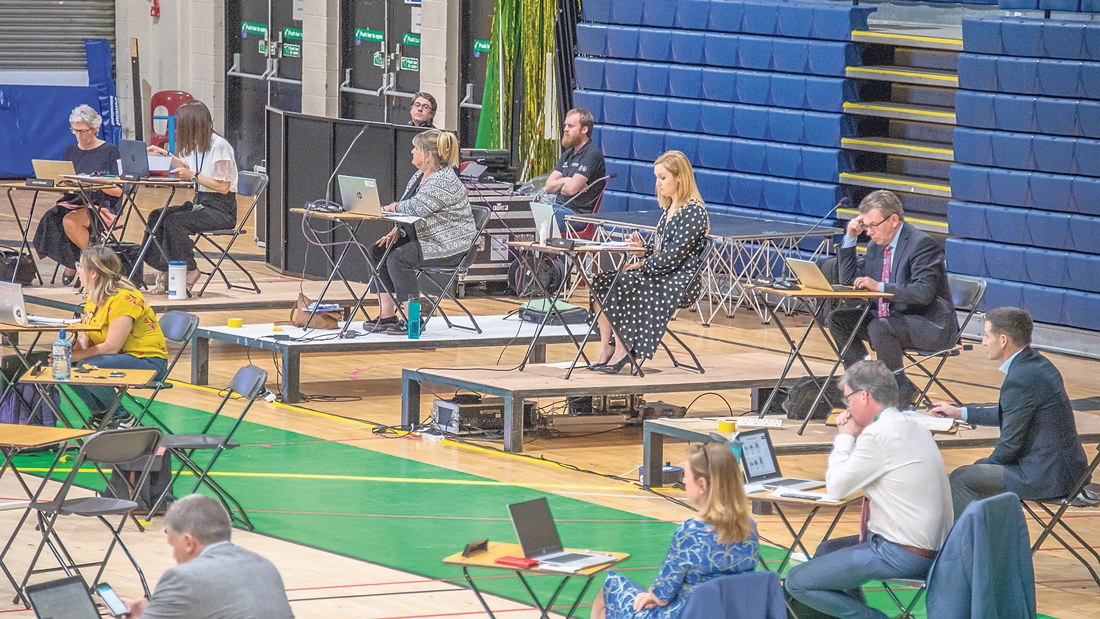 Planners say they understand concerns of a ‘free for all’

The plan outlines a vision for the Tallaght Town Centre area between 2020 and 2026.

Councillors discussing the LAP in the Basketball Arena last Monday

At Monday’s meeting, which was held at the National Basketball Arena due to social distancing guidelines, members voted 32 in favour and three against adopting the LAP, which contains the possibility of delivering 5,000 homes by 2026.

Prior to the final vote, councillors were asked to vote on seven alterations to the draft plan.

During the consultation phase of the LAP, submissions primarily concerned the plot ratio and height of proposed buildings – a legacy of planning issues that have dogged the area in the past.

Council planners assured members that the only places high storey buildings would be located in are at “shopping centres and in Cookstown”.

Council planners say they understood the concern of a “free-for-all” with regard to height, but said the opportunity to go a bit denser in the “right location” is a model “proven to work” in other European cities.

Planners confirmed over 30 per cent of homes in the plan will be three-bed or more.

A number of councillors expressed concern that South Dublin County Council are kowtowing to An Bord Pleanála.

Cllr Louise Dunne (SF) said ABP are “totally dismissive of the LAP”, and “we shouldn’t be pandering to the board.”

“They are doing it for developers. People in Citywest were totally ignored over, due to transport links like the Luas line. As councillors, with the powers that we have left, we should enforce if enforcement is needed, I can’t support this,” said Cllr Dunne.

Solidarity councillors Kieron Mahon and Sandra Fay also voted against the LAP, citing lack of accountability for developers and concerns for the impact on poorer areas.

Council planners said supporting higher density at the “right locations” is what makes “good places and is not pandering.”

“We’re saying in those locations it is appropriate. 10-storeys is too far but (five-six-seven-storeys at centres and in Cookstown) with facilities and transport already in place, it is what makes good places, not pandering,” said the council planners.

Planners warned if the plan was not accepted on Monday, it would be another two and half years before it is back on the agenda, due to the statutory process set out in national legislation.

Cllr Joanna Tuffy (Lab) urged members to compromise, stating she was one of the few councillors to support the Adamstown SDZ.

According to the draft report, the LAP in it’s entirety could accommodate up to 12,800 new homes, and a population of up to 38,000 people over the next 20 years.

NEWER POST‘We want people to say no when moneylenders come to the door’
OLDER POSTCoronavirus: One further death and eight new cases