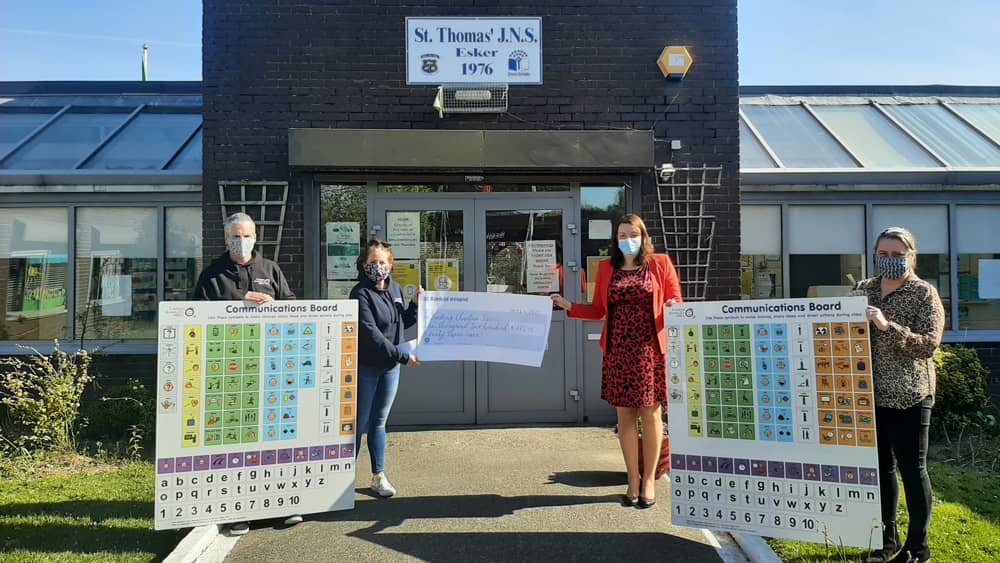 A JUNIOR school have raised over €1,200 euro for a local initiative that helps raise awareness for Verbal Dyspraxia and language communication needs.

Finding Charlie’s Voice was created to raise awareness and support for Verbal Dyspraxia, which is a neurological speech sound disorder, and was inspired by Charlie Byrne.

By dressing up in their own clothes, costumes or county colours the students managed to raise €1,263 for the charity.

Charlie’s Voice have donated assistive communication boards to the school to help support the pupil’s communication through using pictures and symbols.

Teresa Moynihan, Principal of St Thomas’ J.N.S, said that they decided to support the local initiative after they donated the communication boards to the school.

“We held a non-uniform day, it was the day just before the Easter holidays – the half-day on Friday March 26 – the children brought in funds to raise money for Finding Charlie’s Voice,” said Ms Moynihan.

Finding Charlie’s Voice is a local charity set up by Evelyn and Will Byrne to donate communication boards to schools in the area.

The communication boards are visual concepts that assist children that have trouble speaking verbally. It allows children to point to pictures and symbols to create sentences.

“Communication boards are there to support children with verbal dyspraxia and other children too, especially those with additional needs”, explained Ms Moynihan.

“We thought this was a fantastic idea, they were donating them to the school free of charge, and we thought what can we do to support them at school level in their endeavour in supporting children all over the county with verbal dyspraxia.

“The school community led by our chairperson of our parent’s association, Maria Casey, led the fundraising from the parent’s perspective in terms of getting parents to support it.

“The children brought in €3 per child or €5 per family on that day when they wore non-uniform.

“It’s a great fundraiser and we were delighted that our school community was so supportive of the local initiative and it is a very important initiative for children with educational needs,” concluded Ms Moynihan.