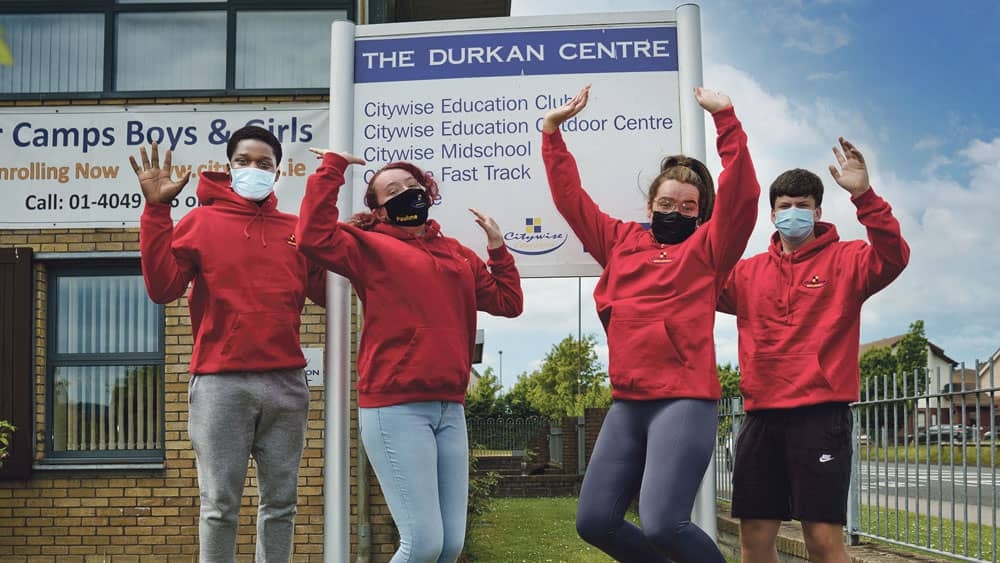 CLOSE to €100,000 has been awarded through the RTÉ Toy Show Appeal to two locally based projects, thanks to the public’s generosity.

Citywise Education Centre in Jobstown is set to benefit from an allocation of €63,250 while county arts centre Rua Red has been awarded €30,000.

Joel, Pauline, Robyn and Aaron from Citywise celebrate news of the the funding from the Toy Show appeal

Both Citywise and Rua Red are among 55 projects across the island of Ireland awarded €3m in grant funding from the €6.6m raised by viewers as part of RTÉ’s Toy Show Appeal last November.

Half of the €6.6m raised was shared between three key charities, Barnardos Ireland, Children’s Health Foundation Ireland and Children’s Books Ireland – with the remaining fund made available to children’s charities in an open call.

A number of charities, which received funding through the open call, have a national focus and support young people from all communities, such as Soar Foundation, Acquired Brain Injury Ireland, Dyslexia Association of Ireland, AsIAm and BeLonG to Youth Services.

Crosscare also received €82,715 to continue its work across Dublin to alleviate food poverty.

Among the locally based projects to receive funding was Citywise in Jobstown, which received €63,250 for a new project called, Citywise Youth in Action.

This youth-led project will see 100 young people, aged between 13 and 18, engage in a leadership programme that focuses on sustainable development in their community.

Young people will develop projects to support their community in becoming more bio-diverse and sustainable.

Jonathon Doyle, the Chief Executive Officer at Citywise, told The Echo how the learning and skills acquired by young participants will also help shape a planned expansion of Citywise into a net zero carbon building.

“Getting the money is brilliant but so too is the recognition,” Jonathan said.

“It’s also great for our young people and our Youth Steering Committee, who came up with the idea and will lead the project.

“It shows how positive the next generation is, this is what they want to spend their time on and invest in their local community.”

A few kilometres down the road in Belgard Square North, the team at Rua Red is celebrating the allocation of €30,000.

The money awarded to Rua Red is for a South Dublin County-wide project called Anseo, which will bring refugee teens together for a series of creative workshops and events focused on building confidence, creativity and developing language skills.

Taking place over 12 months, the programme will be run in partnership with Mother Tongues and see artists working with young people to create a safe place where there can explore their creativity, socialise and practice English.

According to Maoliosa Boyle, Rua Red Director: “This funding will have a massive impact by supporting us to address the disproportionate impact that lockdown has had on some of the most vulnerable young people in our community.

“We are so grateful to be selected by RTÉ and The Community Foundation for Ireland for the Toy Show Appeal.”

Thanking viewers for their donations last November, Toy Show host Ryan Tubridy said: “It’s time to show the people of Ireland just where the money they dug deep for last November is going, and it’s going directly to children all over the island of Ireland who are going to have better happier, safer and more creative, enriched and nourished lives because of these donations.”