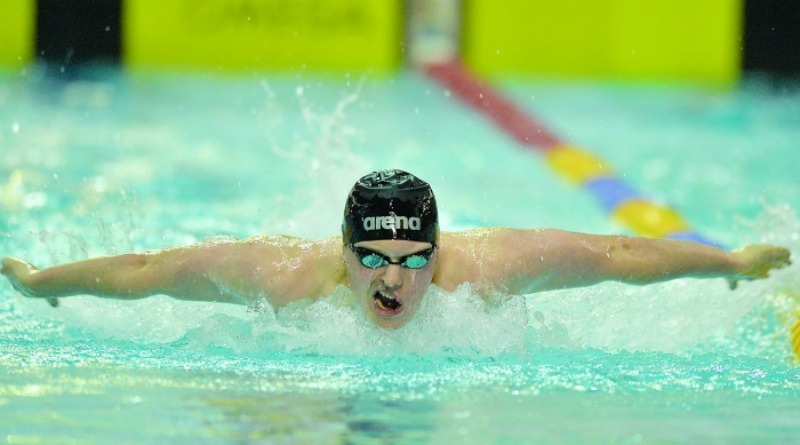 Records tumble for Hyland in Nationals

BRENDAN Hyland closed out the competitive swimming year with a very encouraging performance at the 2016 National Short Course Championships in Lisburn last weekend.

The Knocklyon competitor made several trips to the top of the podium, setting records in both the 100m and 200m Butterfly.
Indeed he bettered the previous 100m Fly best set by Barry Murphy back in 2011 when he clocked 53.04 on the opening day of the competition.

And it got even better for him as he took gold in the Men’s 400m Freestyle in a time of 3:50.72 which was enough to fend off some strong competition from the likes of Gerry Quinn (Longford) and Jack McMillan who both dipped below the Irish Junior Record mark.

“My mam and dad could be there only for the first day and so I felt I wanted to do a really good swim for them,” Hyland told The Echo.

“I was really pleased with that because my Butterfly hasn’t been great for the last couple of months, but over the last two weeks or so it has just been coming together” he added.

The medal wins continued for the Tallaght Swim Club star the following day as he scooped gold in the 200m Butterfly and bettered his own Irish senior record of 1:57.82 from 2014, shaving half a second off that to finish in 1:57.31.

This was followed up with gold in the Men’s 400m Individual Medley which he completed in a time of 4:18.07.

Delighted with his prolific run in this season’s championships, Hyland explained “I’m trying to bring back in more events. I enjoy it more, rather than just concentrating on the Fly and it has been good for me.

“It was a really encour-aging weekend. They were exactly the results I needed and it’s great for my confidence,” he said.

Meanwhile it was a good outing also for Tallaght’s Clodagh Flood who picked up silver in the Women’s 200m Butterfly, finishing second to Templeogue’s Ellen Walshe.

In the Women’s 100m Freestyle her time of 56.98 saw her finish behind Lisburn City’s Rachel Bethel and winner Mona McSharry.

She was back on the podium again the following day, picking up silver in the Women’s 400m freestyle in which she was runner-up to Bethal in a strong time of 4:20.37.

Antoinette Neamt (above) from Tallaght was second to Walshe in the Women’s 400m Individual Medley touching home in 4:57.92.