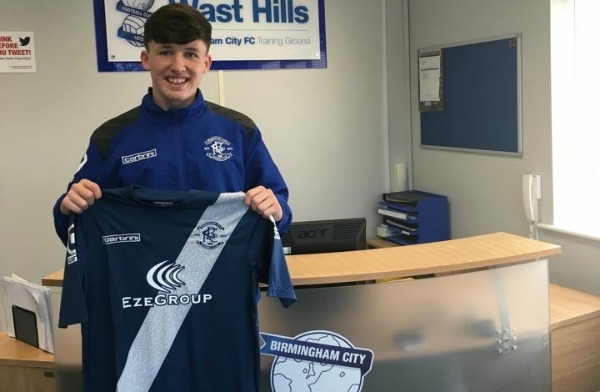 JOE REDMOND from Kilnamanagh put pen to paper on a deal with English Championship side Birmingham City.

Redmond will fulfil every schooboy’s dream with he heads over to the Blues at the end of June and begin a new step in his football career with the Midlands club.

The centre half, who plays with St Joseph’s Boys AFC U16s in Sallynoggin, has impressed a number of scouts but decided to put pen to paper on a deal with Birmingham.

Redmond travelled over to Birmingham has week for the third time and was impressed with the facilities and staff and that played a big part in his decision to join the club.

“I went over to Birmingham last week. They have a great set-up and the management and training staff were great with me,” he told The Echo.

“I just can’t wait now to get over. It’s a dream come true for me. I will finish out by season with St Joseph’s and then ready to travel over,” said Joe.

Redmond has previously played for Crumlin United and Kilnamanagh and has played for St Joseph’s for the past few seasons.

At St Joseph’s, he was very successful winning two All- Ireland’s and a number of DDSL premier league titles.

An Irish underage international and DDSL league representative and Kennedy Cup winner, Redmond has been tipped for bigger things from quite a young age.

Indeed, Redmond was part of a fantastic Crumlin United side in his early days who were said to be the best in Ireland at their age-group at the time if not one of the best ever sides in recent years.

He is with the Ireland U16 squad this week as they prepare for a friendly international with Turkey.

On the club front, St Joseph’s will play St Kevin’s Boys in the SFAI semi-final in what is a big game for his team.