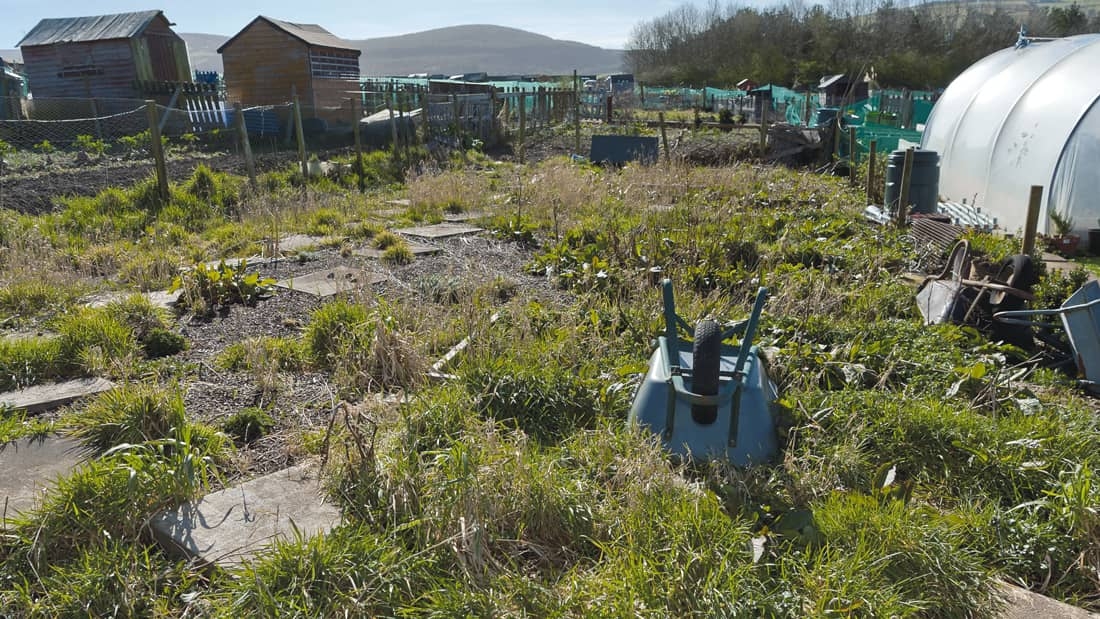 Residents are losing the plot over large number of vacant allotments

FRUSTRATION as people have been waiting up to ten years for an allotment even though they say there are many vacant plots available.

As reported in The Echo last week, there are currently 175 people on waiting lists for an allotment across four locations in South Dublin – Corkagh Park, Friarstown, Mill Lane and Tymon Park.

One of the vacant allotments in Friarstown

These allotments are rented for the purpose of recreational gardening, cultivation of herbs, flowers, fruit and vegetables and no other purpose such as residential or commercial purposes.

One man has been waiting on an allotment in Friarstown for over a year.

“I was sharing an allotment with a fella up there and basically what happened was I was sharing it for a few years and last year we had a difference of opinion and I decided to get my own allotment. I applied with South Dublin County Council for it and they said that there was 40 people before me.

“What happened was the figures were not going down too quick for an allotment, so about a month ago I went around all the allotments up there and counted 34 of them that weren’t being used.

“There are allotments up there that are infested – there are actually rats breeding in them. Weeds are growing onto other plots.”

In the terms and conditions to own an allotment, it states that ‘failure to work 75% of a plot may lead to a licence being terminated and the plot being re-let’.

“The council said it is because of Covid and people can’t get up to the allotments, but they were only closed for three months last year. There are some of them there that haven’t been touched in over two or three years.

“I am frustrated because I thought I would have had one by now. I have all my potatoes ready to be put down and I had my onions growing in pots since last November ready, but they are all overgrown.”

Brian Mac Cormaic, member of ‘Friends of Tymon Park’, is a holder of an allotment in Tymon Park.

“When I came here, they told me that I would never get an allotment because the list was too long, and then I discovered that there were five lying idle at that time, and they had been lying idle for five years, which is disgraceful because I had been on the list for years thinking I would never get one. It was only with a lot of hardship and trouble, I got one.

“The list should be renewed every year and if they don’t renew it they are taken off it so that people move up on the list quicker.” Brian added.

Another woman who is an allotment holder at Tymon Park told The Echo that she was on the waiting list for ten years.

“I was on the waiting list for ten years and I just got it last year, so I am in now and it’s fantastic. I know the reason why I was on it for so long is because people don’t give their key back or that nobody is actually paying attention as to what is happening.

“I rang up and I was 161 on the list, that was in the early days and then I rang again maybe two or three years ago, and I was told I am next. Then I was another year or two waiting, and I was quite happy to take it then when I got it.

“The one next to us is vacant, and there is another one further down that is vacant and it is such a shame that there are 45 people on the waiting list.”

When The Echo contacted South Dublin County Council for a statement, they said: “Vacant plots are offered to the next person on the waiting list. A full review of the Council’s Allotments Policy was initiated at the Environment, Water and Climate Change SPC on 16th February 2021. As part of this review, capacity and supply & demand will be examined. A full report with recommendations will be brought back to the SPC in due course.”