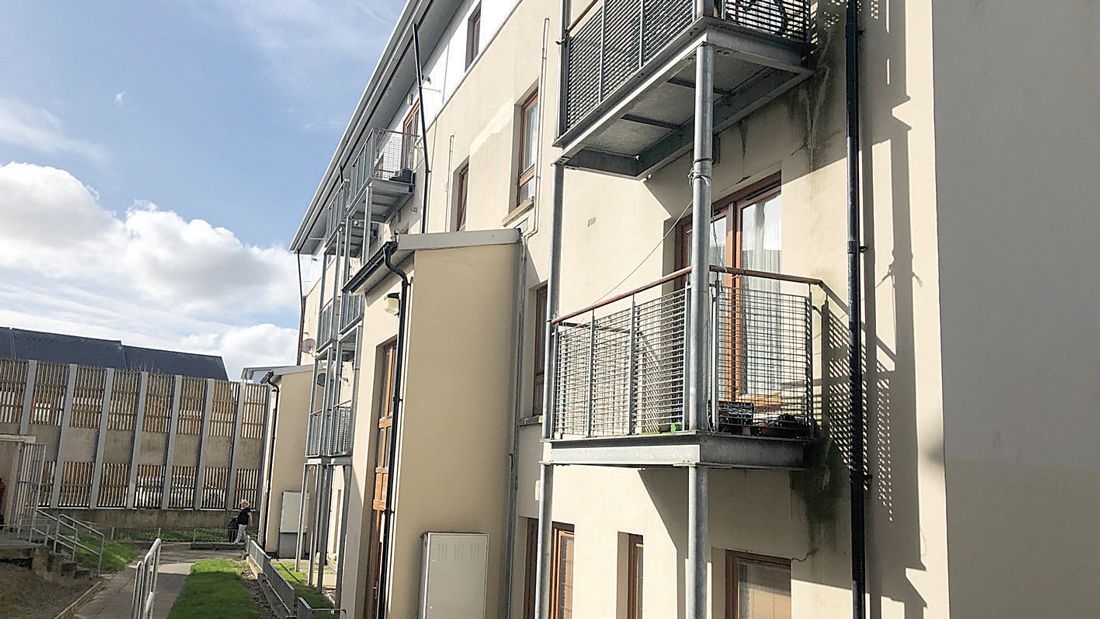 RESIDENTS of a six-unit apartment block in Mac Uilliam in Tallaght have said that they are frustrated with persistent issues such as leaks and mould in their homes, with one resident claiming that, when it rains, he can see “water running down the side of the walls” of his apartment.

The apartment block is located at Mac Uilliam Dale, near Fortunestown Lane, and numerous residents have had to contend with issues with the condition of the apartments.

One of the apartment blocks at Mac Uilliam Dale

One resident, who asked to remain anonymous, told The Echo: “The leaks in my apartment started about a year ago, and we have mould because of the amount of leaks.

“It’s not constant, but sometimes when it rains water runs down the side of the walls and floods the apartment.

“We got a cooker and a washing machine and they stopped working after the leaks, and the lights in some of the rooms flicker after the apartment has been flooded.”

The resident added that he was also concerned about the presence of mould in the apartment, as he has two children – one of whom has asthma – and he believes that, at this stage, the apartments are beyond repair.

“This whole block needs to be closed down,” he said. “Some of houses have black mould in them, and you can see the damp and wet stains on the ceilings.”

According to the resident, he and many other residents’ attempts to contact Oaklee Housing Trust, who manage the apartment block, to resolve these issues have left them feeling “fobbed off”.

As a result, the resident stopped paying his rent in September to see if it would move the trust to carry out work on the apartment, but no repairs were made, and the resident resumed paying rent last February, as he didn’t want to be in arrears, so he could seek housing elsewhere.

“Every neighbour wants to get out of here,” he said. “We’re all completely sick of this. We can see the water coming in through the ceiling.

“We have neighbours who recently moved in and they found mould that had been painted over. All of the residents here are having problems.”

The residents have also been in touch with Solidarity-People Before Profit TD Paul Murphy, who has acted on their behalf to try and get the issues resolved, but is also facing difficulty in getting a response from Oaklee.

“There are loads of issues in that block,” explained Deputy Murphy. “There’s a particular issue in their block that when it rains, the water goes into their homes and they’re left with really bad mould.

“It’s a disaster, and the residents have contacted Oaklee looking for help but they’re received no response.”

A spokesperson for the Oaklee Housing Trust said: “South Dublin County Council own the entire Mac Uiliam estate and Oaklee Housing manage a number of properties on their behalf within the estate.

“We are aware that there are issues relating to damp within the estate and a report, specific to the properties we manage, is currently being prepared to examine the cause, the solutions and the cost to rectify the issues.”