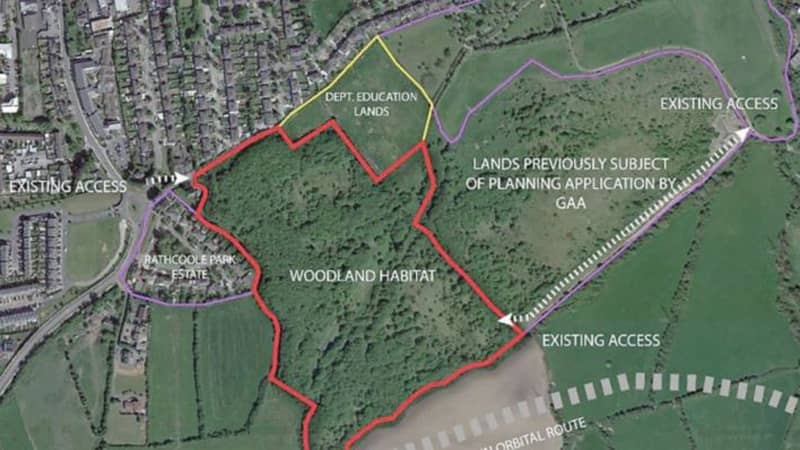 RESIDENTS are taking a judicial review in hopes to overturn the planning approval for the development of 204 houses, reports Caomhóg Breathnach.

As previously reported in The Echo, South Dublin County Council plans to develop houses, GAA pitches, a primary school and a library at the woodlands site in Rathcoole, which is located behind Coolamber and Rathcoole Park.

In January, Justice Richard Humphreys granted permission at The High Court for the action to be brought against An Bord Pleanála and the State. The hearing was set for June but has been pushed back to January 2022.

An Bord Pleanála recently gave permission for phase 1 of a 2 phase development that will see the destruction of the woodlands.

In September 2019, the ABP Inspector’s report acknowledged a submission noting an area of the woodland habitat corresponding to ‘Priority Annex 1 Habitat to 91EO Alluvial Forests with Alnus glutinosa and Fraxinus excelsior’ as listed under the EU Habitats Directive.

However, it was noted that the Woodland is not in a Special Area of Conservation, and therefore an Appropriate Assessment is not required.

Deirdre Tierney from The Four Districts Woodlands group told The Echo: “The 204 houses that’s a strategic housing development and the location of that development is adjacent to the woodlands, so it’s a stepping-stone into it.

“When the development plan went to An Bord Pleanála, An Bord Pleanála never established whether it was going to impact the woodlands or not, even though they had a submission that alerted them to the fact that there was a habitat in it.

“Apart from the environmental impact assessment, the judicial review will look at the pre application consultation, which is also being challenged, because the only time the public can make any observations is when its actually gone into planning.

“Unless the people talk to the local people and ask them we’re going to do this what do you know about the area that might be positive or negative, there is no opportunity before that. That’s one of the faults with the strategic housing development method.”

When asked if she thinks the judicial review will be successful in overturning the planning approval, Deirdre said that she is hopeful.

“Obviously, I am hopeful that it will. There are certain processes and planning procedures in place and guidelines and the reason that they are there is to ensure effective planning and good planning and if they are not adhered to you are moving away from that.

“It’s also there to protect the environment, if you are ignoring that then why have them?”