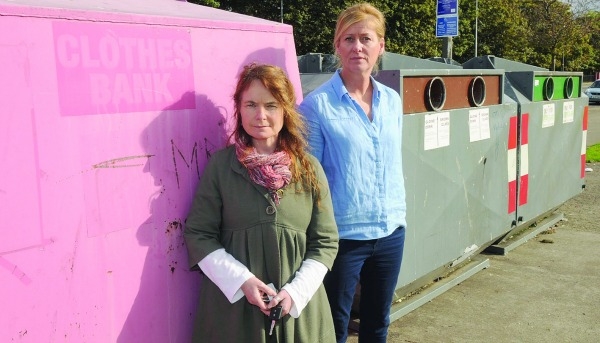 ‘Responsible citizen’ gets fined €150 for littering

A WOMAN who received a €150 fine after leaving a clothes bag beside a clothes bank on Sundrive Road – has unsuccessfully appealed the decision with Dublin City Council.

Bangor Road resident Carrie Lynch said the breast cancer clothes bank at the Four Roads was full at the time, and a littering notice was up so high on the lampost, that it was “invisible”.

This was backed up by Sinn Féin councillor Máire Devine, who says the littering sign has since being lowered, after Mrs Lynch lodged an appeal with the local authority.

Mrs Lynch said : “In good faith, I gathered unwanted clothing to deposit at the bank. It was full so I left the bundle below the bin.

“At no time was I aware this constituted littering. When I queried the fine, DCC informed me that the notice of littering was displayed at the recycling centre.

“I went back to check on this and the notice is some metres away from the bin, very high up on a lighting pole. There was no reasonable chance this would have caught my eye.

“I was completely unaware that my efforts to recycle clothing would be considered as littering. The sign is misplaced and invisible.

“There is nothing on the bin itself to indicate the protocol for recycling especially when, as is often the case, the bin is full.”

Cllr Devine blasted the council for the harsh punishment of “someone doing their civic duty.”

“The council didn’t take cognisance of the fact that the sign is up so high,” said Cllr Devine.

“The bank is always chock-a-block. She thought she was doing her civic duty.”

An upset Mrs Lynch said she is “environmentally aware” and acting as a “responsible citizen to support Breast Cancer Ireland.”

In an unsuccessful appeal to the council, Mrs Lynch said she spoke with Breast Cancer Ireland who agreed to notify the company who collect the recyclables, to ensure “more frequent and regular removal of items in the bin.”

Mrs Lynch also requested the appropriate placing of the by-law sign and an explanation that clothing is also considered litter.

Dublin City Council did not respond to queries by The Echo at the time of going to print.