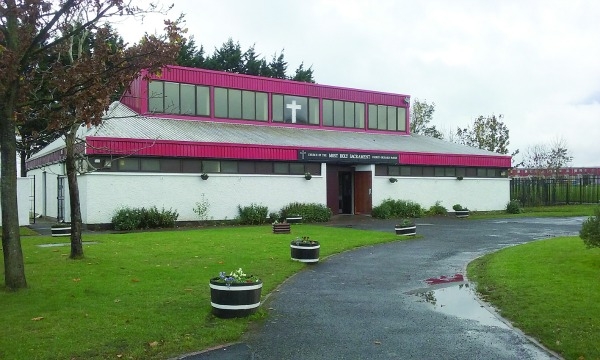 A CHRISTMAS miracle occurred in Cherry Orchard, after the community rallied to ensure stolen goods from a local church were returned to the parish post-haste.

In November, The Echo reported how the front doors of a church were kicked in by a thief who proceeded to smash every internal door (six), and steal parish property, including a microphone, portable speakers and a television.

The robbery at the Church of the Most Holy Sacrament in Cherry Orchard, shocked and sickened the local community.

After the incident was reported in The Echo, community members got to work, with one man reportedly getting a “good clip around the ear,” according to a local source.

Fr Egan said: “The first thing that happened was a black bag containing the portable speakers were left outside the parish door. A few days later, someone called to the house with the television and remote control.

“However they came about it, they saw the article in the paper, probably realised where the tv came from and brought it straight back. The only things that weren’t returned were the microphones, but they are no use to anyone without the speakers”

He continued: “The reaction from people to the article in the paper was that they were very upset. We even had people call into us, who don’t usually go to the church, to express their shock and annoyance. People are decent.

“I’ve worked around the country and churches get broken into. It’s not uncommon – it happens. But it shows the good community spirit here. When people get upset, they sort it out.”

It was well-attended, and residents enjoyed refreshments afterwards in St Ultan’s National School.
A picture page of the festive event will feature in The Echo’s two-week Christmas edition on December 17.