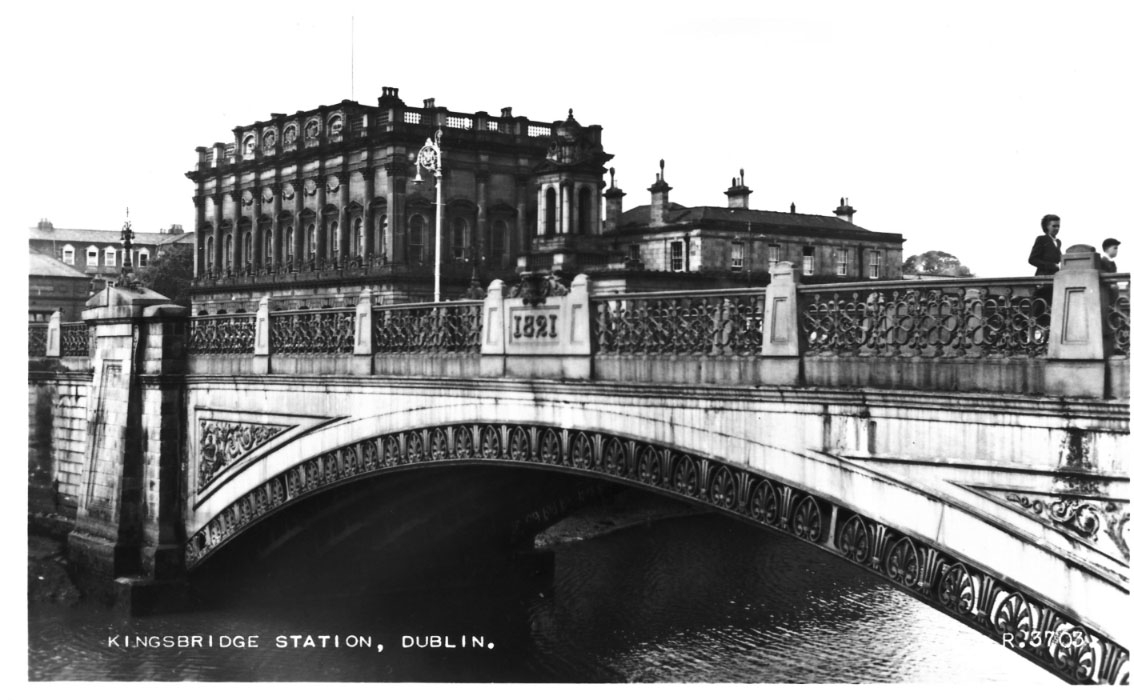 For this week’s look-back we are exiting Chesterfield Avenue, walking down Parkgate Street, and turning right towards a building that many victorious Limerick hurling fans visited last week.

Kingsbridge Station was opened in 1846 and got its name from the nearby King’s Bridge which spanned the Liffey.

Often stations were named after the monarch who reigned at the time they were built. But while there is a Queen Victoria Station in London and Belfast, what became Dublin’s new station did not take her name, despite her being on the British throne at the time.

Victoria lived to 82 years of age, an eternity in those days, before passing away in 1901.

For example Kingstown Station (now Malin-Dun Laoghaire Station) got its name after being named in honour of the late King Edward who had passed away 14 years previously.

The station was built by the renowned London-born architect Sancton Wood, who had already made his name in his homeland designing train stations. He designed the building in the style of an Italian Palazzo, and a central block on nine bays was designed to hide the train shed which were the creation of Sir John MacNeill.

Dundalk-born civil engineer, John MacNeill, was one of the foremost in his profession at the time, and had previously spent ten years as assistant to the famous English engineer Thomas Telford.

In 1820, while working on a new road linking the Port of Holyhead to the main route to London, he developed what became known as “McNeill’s Road Indicator” which was a device which calculated the weight a planned road would need to be to carry the expected traffic flow.

It was soon being used on the Shrewsbury to London Road and Sir John even tested its usefulness on board an iron boat that sailed through the Paddington Canal on the British capital.

Around the same time in 1846, Newbridge Station was opened in Kildare, and being just a few miles from The Curragh Camp, was viewed as a key resource to move troops to Dublin Port and elsewhere at a quicker rate.

Both stations and the line they served, were operated by the Great Southern and Western Railway, and at its height they operated on 1,800 kilometres of track, with the Dublin-Cork line being the key route.

The headquarters of the company was located in Kingsbridge Station, and it employed the services of the celebrated genius William Dargan to spearhead the creation of the railway line to Cork, and the later spur section off the mainline to Carlow.

He is most famously known for creating the Dublin to Rosslare line, most particularly the tunnels he bored through Bray Head, which were regarded as an exceptional feat of engineering in its day.

Being able to travel to some of the biggest towns in the country by train, and no longer having to rely on slow horse-drawn carriages truly sparked a transportation revolution in the country.

Yes we also had the canals, but they motored along at a far slower speed than their perceived speed-demon rival on the rails.

We wrote in a previous piece about the Inchicore Rail Works – it was the GSWR Company that built it to service the trains carrying passengers to various parts of the country.

When the Rising broke out in 1916, Kingsbridge Station played an important role, as troops sent up from the Curragh and elsewhere arrived in the building, awaiting further orders.

When the insurrection was quelled it was then used as an initial round-up point, where rebels were detained, before being marched on to Richmond Barracks in Inchicore.

Fifty years later, in 1966, the station was renamed Seán Heuston, after one of the leaders of the Irish Volunteers, who played a key role in the battle.

Seán was born in Dublin in 1891 and the 1901 census shows he was living in a tenement in the Jervis Street area.

His father was living and working in London at the time, so he rarely saw him.

Like many thousands of Irish families, they suffered due to the lack of jobs at home, and the letter from across the water containing the remittance money was eagerly awaited by his mother every month.

Upon leaving O’Connell’s School in Drumcondra, he (ironically, as it would later turn out) got a job with the Great Southern and Western Railway Company, and worked as a clerk in the Limerick Depot.

Moving to a new city can be hard, especially if you have little or no family or friends living there.

He soon made new friends by joining the Na Fianna youth group and the Irish Republican Brotherhood.

In 1913, he succeeded in his quest to be transferred to Kingsbridge Station, and moved back in with his family.

Despite his young age, he was appointed commander of the local Volunteers, who met regularly in Blackhall Place.

During the Rising, he and 14 others spent three days occupying the Mendicity Institution, on Ushers Quay.

Much to their embarrassment, soon after occupying the building they became aware it was also a place the poor visited to be fed with a free meal. It was this group that shot the first British soldier during the insurrection.

Gerald Neilan, a Royal Dublin Fusilier and a native of Rathmines, was shot dead on a march from Collins Barracks into the city.

Remarkably at this time, his own brother was holed up across the river in the Four Courts, as an active member of the ‘enemy’.

Seán Heuston was one of those executed in Kilmainham Jail in the aftermath of the rebellion.

I wonder what he was thinking as he looked down from heaven when they cut the ribbon as his former workplace was named after him.

So when you are next catching a train to Cork or Galway, as you come out of Easons or the M&S Food Hall, why not stop and marvel at the originally named Kingsbridge Station, and the ornate pillars designed by the late great Sancton Wood.