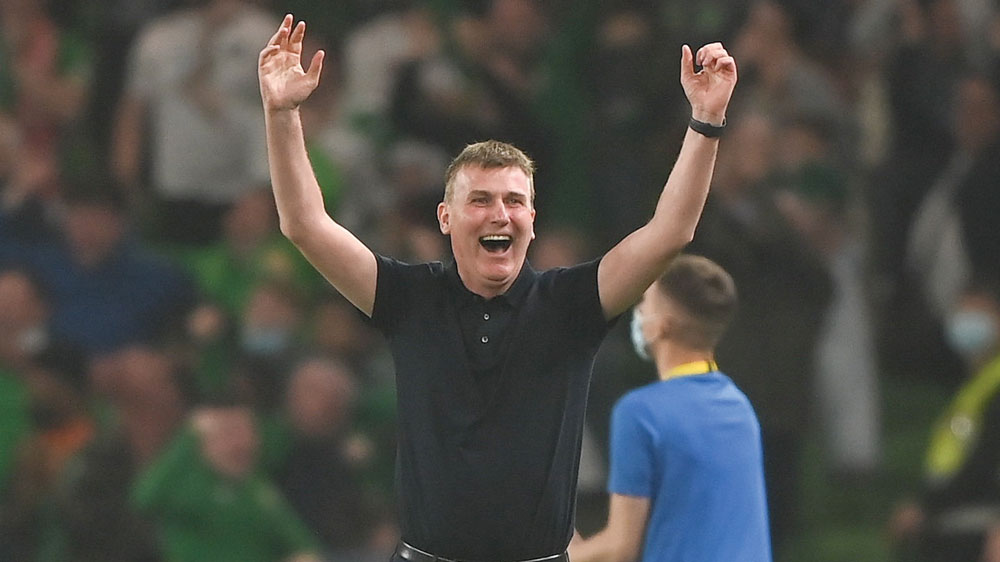 Callum Robinson was the man of the hour at the Baku Olympic Stadium this evening as his brace of goals earned the Republic of Ireland a 3-0 victory against Azerbaijan in Group A of the FIFA World Cup qualifiers.

Having been the subject of intense media scrutiny earlier in the week, there was considerable pressure on the West Bromwich Albion attacker in advance of this game.

He responded in the best way possible, twice rattling the net in the opening period to put the Republic in the driving seat.

Chiedozie Ogbene also added his first Irish goal on the stroke of 90 minutes to comfortably seal all three points for the visitors.

Not only was this Ireland’s maiden win of the campaign, it was also a first competitive success for Stephen Kenny as senior international boss.

The Tallaght man’s only previous triumph was in a summertime friendly against Andorra and with his own position coming under the microscope, this will lift a considerable weight off his shoulders.

The former Shamrock Rovers and Dundalk manager was hoping for a fast start from his side and he got it with just seven minutes on the clock.

Having first made his name under Kenny at Derry City, James McClean has gone on to become a mainstay of international football.

He picked out Robinson on the edge of the box, who proceeded to unleash an unstoppable left-footed drive into the roof of the net.

It wasn’t always plain sailing for Ireland in the first half – Firhouse native Gavin Bazunu was on his toes between the sticks – but they ultimately doubled their advantage in the 38th-minute.

Cutting onto his favoured right boot, Robinson produced a firm strike that was deflected to the back of the opposition net. 2-0 in front of the break, Ireland were in a strong position to push on for a much-needed triumph.

They continued to create a succession of chances, with Shane Duffy heading agonisingly wide from a Robinson cross on 56 minutes.

Robinson had a number of opportunities to claim a second career hat-trick, but equally, Bazunu came to his side’s rescue on a couple of occasions.

After making an acrobatic save from Abbas Huseynov, he later tipped a Gara Garayev drive onto the crossbar.

Ireland were never in any real danger of letting their lead slip, but Ogbene ensured it was a satisfying end to the night when he headed home a Josh Cullen corner from the right-flank.