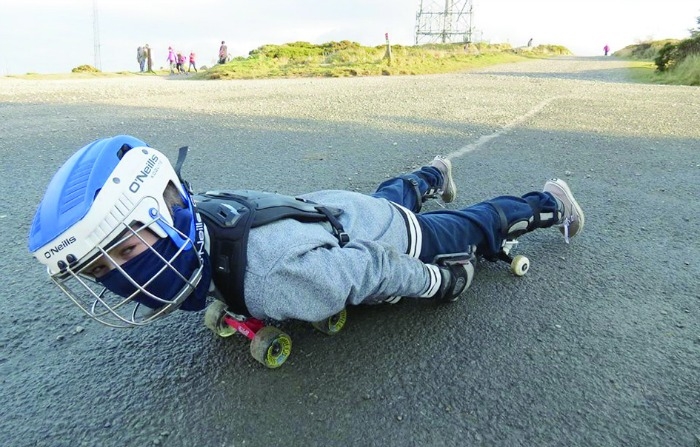 Rolling down Three Rock to raise funds for refugees

A RATHFARNHAM schoolboy rolled down Three Rock Mountain using a homemade roller suit to raise money for refugees in a camp in Greece.

Danny Ludlow, 11, started building a roller suit with has dad after being inspired by French designer Jean-Yves Blondeau, better known as ‘Rollerman’, when he and his sister Lia, 19, decided they wanted to use the roller suit for a good cause after their mother returned from a trip to Greece.

“My mom visited Greece a few months ago and found out about the [refugee] camps,” the 5th Class student said.

“When she told me about them I realised that there were kids just like me there.”

Danny decided he would use the roller suit to roll down Three Rock Mountain and raise money for the refugees, so his sister set up a Go Fund Me page to raise funds to go directly to the camp that their mother Jessica visited in Serres.

Explaining how this idea came about, his sister Lia said: “It was Danny’s idea, he built the suit.

“He wanted to do the roll, then I set up the Go Fund Me page for him.”

Danny rolled down Three Rock on December 28, and when talking about the day he told The Echo that when he was at the top of the mountain he thought: “This is really high, I was really scared.

“And I felt like I was going insanely fast because I was right beside the ground.”

Danny said that after the roll he felt “pleased, tired, exhausted but happy.”