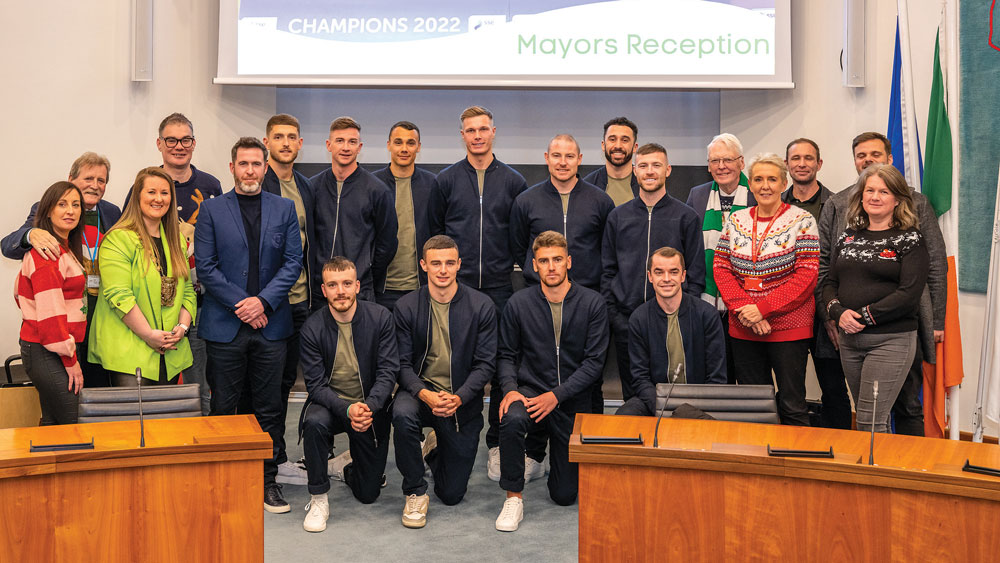 Rovers are ‘an inspiration’ to community

SHAMROCK Rovers are an inspiration to the community Mayor Emma Murphy told players at a civic reception in County Hall to celebrate their three-in-a-row Airtricity League success.

Player of the Year awards for the senior and junior teams were also presented to Rory Gaffney and Andy Lyons respectively and collected by team Captain Ronan Finn.

The event was attended by South Dublin Councillors, the Shamrock Rovers team, and management as well as match day volunteers.

There were many words of admiration and encouragement for the team, the club and Tallaght Stadium from the speakers on the night; Ciaran Medlar – Chairman of Shamrock Rovers, Stephen Bradley – Manager of Shamrock Rovers, Danny Mc Loughlin – Chief Executive of South Dublin County Council, Mayor of South Dublin Cllr Emma Murphy and local Coucillors and Rovers superfan Cllr Charlie O’Connor.

Mayor Emma Murphy said: “South Dublin County Council wish to acknowledge and celebrate Shamrock Rovers success; they are an inspiration to our community.

“They have shown commitment, skill and passion for the game and for their team. Winning the Airtricity once is a huge success but to win three in a row shows the hard work and dedication this team is made of.

“We are extremely proud of our relationship with Shamrock Rovers and Tallaght Stadium management and hope that this relationship will continue to thrive.”