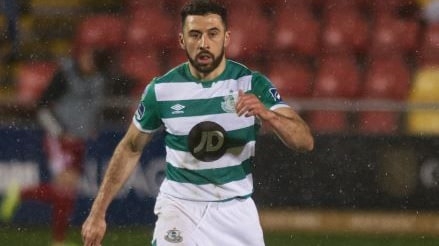 SHAMROCK Rovers came through the most dramatic of nights to progress to the Europa League second round qualifiers after they won out 12-11 in a sudden death shootout against Ilves Tampere in Tallaght Stadium last night.

Twice the Hoops had to battle their way back from a goal down to draw 2-2 with the Finns and force extra time, the entirety of which they played with ten men after Liam Scales had been dismissed following a second yellow on 87 minutes.

The hosts were trailing as early as 10 minutes when a delivery in caught the arm of Joey O’Brien and the match official pointed to the spot, Lauri Ala-Myllymaki converting the resulting penalty.

Yet Ilves’ lead lasted a mere four minutes as Graham Burke struck back for the Hoops with a lovely finish from the edge of the area.

Still the visitors edged back in front by way of a powerful effort by Joona Veteli on 62 minutes only to see the resilient Rovers again restore parity when Roberto Lopes got his foot to the ball to steer home a corner.

Yet as the match headed towards extra time, Rovers suffered another huge set back when Scales was dismissed, but they weathered fierce pressure in extra time to force a shootout

They even suffered an inauspicious start here after Jack Byrne failed to convert their first spotkick, but they were level again when Jair Tavares da Silva missed for Ilves immediately after.

The shootout ran deep into sudden death and when Alan Mannus finally made the stop, it set up Joey O’Brien to win it for the Tallaght side and he duly obliged.