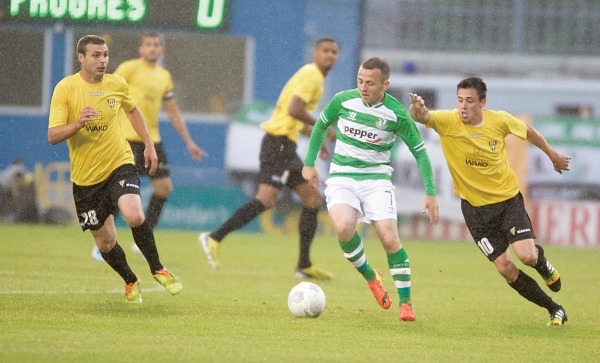 Rovers look to bounce back in Europe

SHAMROCK Rovers Gary McCabe believes that his side can come away with the right result when they face Finnish side RoPS Rovaniemi on the Europa League First Qualifying round game second leg tonight.

The Hoops have it all to play for after they fell victim to the Finnish outfit 2-0 in Tallaght Stadium on Thursday night and then followed the news on Sunday that Pat Fenlon had left as manager after two years in charge.

“They were not great going forward. They had two chances in the game and they took them but we will have to bounce back from that result,” Gary McCabe told The Echo.

“We just have to put last week’s game behind us and focus on the second leg.

“We have the players to get the result. It would be huge for the club. We just have to go out all attack and hopefully we can get an early goal to settle us down. Getting an early goal would be an ideal situation for us.

“We were very disappointed after last week’s outcome and the lads will be anxious to get a result in the second leg.

“We owe it to the club and the supporters and we are confident we can do well,” added McCabe.

Rovers travelled out to Finland on Wednesday morning on a chartered flight of about 50 people, which included players, officials and supporters.

It will be a long journey in the space of 24 hours for the players, but McCabe feels that his will have no impact on the team.
“We went to India in pre-season and did plenty of travelling, so I don’t think the journey will cause us problems.

“They play on an astro style pitch, which will be different for us, but we will go all out and attack to get the result.”

Rovers will be staying in the Santa Claus hotel and they will be hoping that they can get an early present by scoring that crucial early goal.