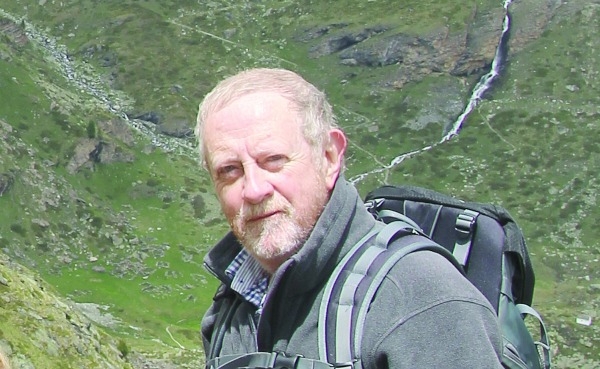 LOCATED on the ridge of Glenasmole Valley, Montpellier “Hellfire” Hill is one of South Dublin’s most famous landmarks.

Rathfarnham author Michael Fewer is set to release his latest book, “Hellfire Hill: A Human and Natural History” this week in County Library, Tallaght about the history surrounding the mysterious Hellfire Club and its surroundings.

Michael, who originally worked as an architect and has been publishing work for the past 25 years, has had over 21 of his works published about his travels throughout Ireland and Europe and the historical significance of its locations.

Ahead of the launch of “ Hellfire Hill: a human and natural history” on July 4 in County Library, Michael spoke to The Echo about his latest release and his plans for future publications.

Hi Michael. Tell us, why did you did decide to write a book about Hellfire Hill?

I decided to write a book about Hellfire Hill as it’s an area that I’ve been walking for 45 years. It’s practically in my back garden and over these years I’ve experienced it throughout the seasons. It is such an amenity for the area and has such historic connections also.

Is Hellfire Hill a topic that you had wanted to write about for a while? How did the idea for it come about?

Really, it’s been in the making for 45 years. I got to know the area very well, and I think it’s important that people can learn about it. I mainly write on areas that I feel people should know, and I think that knowing information about a place helps to enjoy it even more. You get a lot more value out of visiting a place by knowing more about it. I would also hope that helps to open the eyes of people who don’t know about it.

Have you written about South Dublin before?

Yes, I’ve had a number of books about South Dublin released before about the Wicklow Military Road (which runs over 60km from Rathfarnham) and The New Neighbourhood of Dublin which looks at buildings throughout the county.

Would you consider Hellfire Hill one of your favourite locations in Dublin?

It’s very hard to say if a place is one of your favourites, but I visit here about three times a week so it would be fair to say it is one of my favourites.

The book is set to be launched on July 4 in County Library. Are you looking forward to it?

I am looking forward to the book launch and meeting people who are familiar with Hellfire Hill. This is book number 21 for me, and it’s my second book in two months. In May I released a book called Naturama, which is a book for children about the wonders of Irish nature.

Is there anything you’re working on in the near future? Will South Dublin feature in it?

At the moment there’s nothing about South Dublin in the pipeline, but I’ve got a travel book about Europe’s western fringe due to come out and a book about the history at the beginning of the civil war.

Do you think you’ll work on another book about South Dublin in the future?

I’m sure that something will develop soon, especially with living here and looking at it everyday. There’s always something to look at in South Dublin.