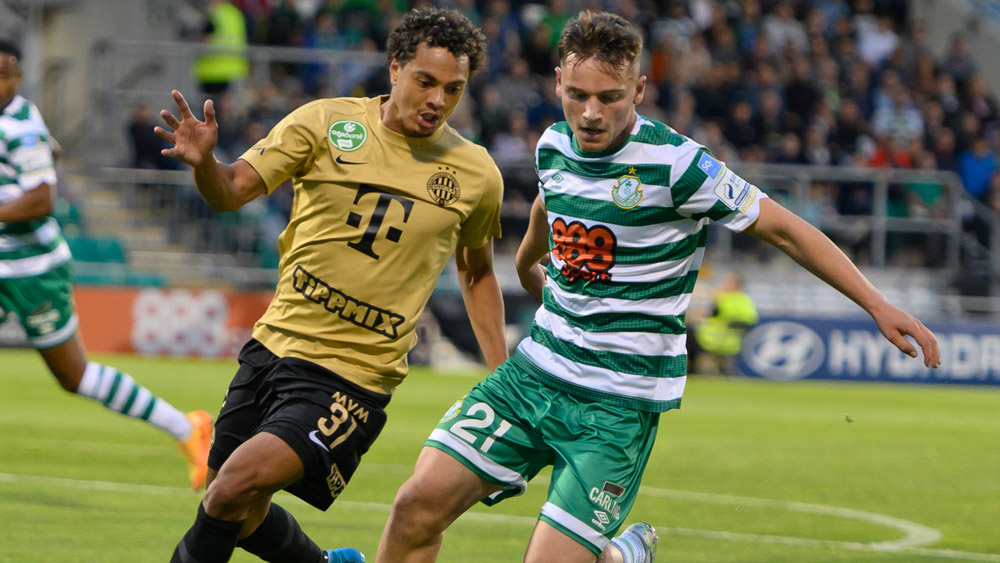 It wasn’t enough to ensure their progression in the competition, but a late goal from Andy Lyons sealed a 1-0 victory for Shamrock Rovers in the second leg of the UEFA Europa League play-off round against Ferencvaros at Tallaght Stadium last night.

4-0 adrift on aggregate following last week’s opening bout in Budapest, the Hoops were effectively out of contention for a group stage spot in European football’s second-tier.

Yet Stephen Bradley’s men were eager to maintain their 100% home record on the continent in 2022 and managed to do that in dramatic fashion.

Having recorded an impressive win over a side that had comprehensively put them to the sword in the Hungarian capital seven days earlier, Rovers can now push forward into the UEFA Europa Conference League group stages confident of causing a big splash.

The draw for the ECL will take place later today with the south Dubliners listed as third seeds alongside the likes of Nice, Anderlecht and Hearts.

Justin Ferizaj was RTE’s official choice for man of the match at the end of the contest and he was making a big impact in the final-third for the hosts.

With 27 minutes gone on the clock, he unleashed a firm strike that just cleared the crossbar of former Bolton Wanderers and Liverpool netminder Adám Bogdán.

Veteran Hoops custodian Alan Mannus came to the rescue of his side in the closing minutes of the opening period, which ultimately finished with the deadlock remaining unbroken.

The game became more free-flowing as the action developed with both sides going close to opening the scoring in the third-quarter.

Sean Kavanagh and Inchicore man Richie Towell had good opportunities for the home team, before Mannus once again stepped up to turn away an effort from Adama Traoré.

When Lyons missed a golden chance to shake the Ferencvaros net off a precise Jack Byrne pass, the prospect of a scoreless outing appeared to be looming large.

That was until Lyons got his head to a Byrne corner on 89 minutes for his seventh goal of the season – and his first in Europe – to claim an excellent triumph for Shamrock Rovers.