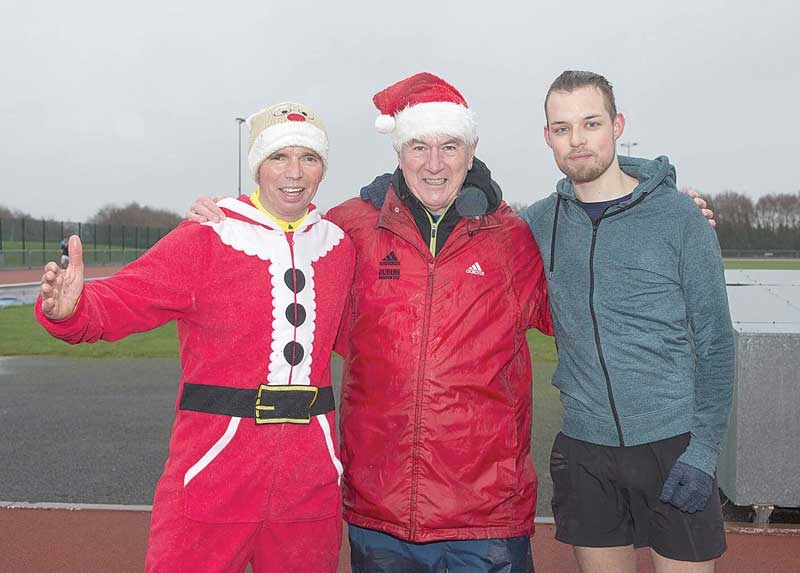 Runners and walkers go the extra mile for GOAL

HARDY runners and walkers braved the elements on Christmas morning to participate in the annual GOAL Mile Run at Tallaght Athletics Club.

On what was one of the wettest days over the festive period, a large crowd gathered at the Tallaght venue for the 14th GOAL Mile run.

Many runners from the area took part in the event including former Ireland soccer manager Brian Kerr along with Dublin GAA star Kevin McManamon and RTE presenter Anne Cassin of Nationwide. Dundalk FC assistant manager Vinny Perth and 83-year-old Angela O’Byrne who is involved with the local ICA were also in attendance.

In just under two and a half hours, the event raised over €6,500 for GOAL Mile.

“When you consider the weather conditions on the morning, it reflects great credit and the generosity of Tallaght and the surrounding districts, said Tallaght AC’s John Cullen.

“I would like to thank all who support the event and helped make it such a success again this year,” he added.

Lucan Harriers held a GOAL mile and it was also a big success.

There was a great turnout for the Goal Mile at Lucan Harriers Athletic Club with approximately 450 hardy souls of all ages, and their canine friends, taking part and walking, jogging or running a mile while making a donation to Goal.

“It is also the last year we will run the GOAL Mile on the cinder track, as a new tartan track will be laid from January – April 2018 so next year’s Goal Mile will be run on a top class track and without the many puddles that we’ve come to expect on Christmas morning”.

The Clondalkin venue has been hosting the event since 2010 and organiser Melissa McGuire was happy with the way it went.

“There was a great atmosphere and the support we got from the local community was great.

“The weather held out which was a boost and we would like to thank local people for their support” she added.