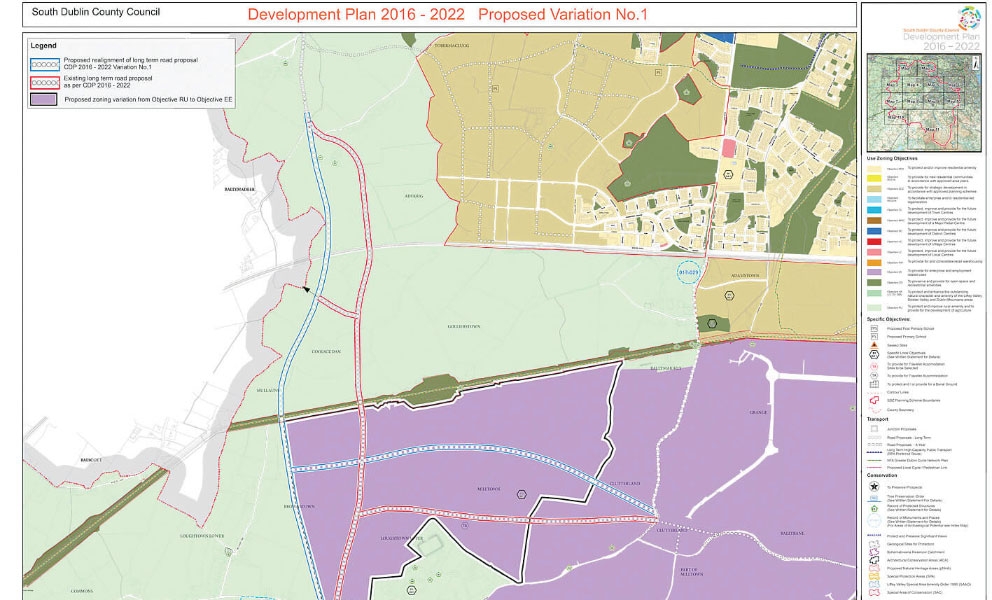 477 acres of rural land to be rezoned in Grange Castle

AN AMENDMENT to rezone close to 200 hectares of rural land in Grange Castle West, was not best received by a number of councillors at last months monthly meeting in South Dublin County Council.

South Dublin County Council put forward a variation to the county development plan, to change the zoning of 193 hectares (477 acres) of lands at Grange Castle West from rural to enterprise and employment - in line with the local authority’s policy to provide support for sustainable economic expansion in the county.

The sprawling landbank includes Grange, Ballybane, Aungerstown, Clutterland, Peamount, Milltown, Brownstown, and it is located to the south west of Clonburris, where a major plan is in place to build over 8,000 homes.

The proposed amendments would also result in the realignment of the Western Dublin Orbital Route (North).

Five People Before Profit and Solidarity councillors submitted a proposal for a new town within Grange Castle West, comprising 2,000 homes at Peamount, at Monday’s meeting.

Cllr Mick Murphy (Solidarity) stated he was not noting the variation put forward, and called for the decision to be deferred for a month.

He asked South Dublin County Council Chief Executive Daniel McLoughlin why this was going through now, and claimed the council chief was stating his “intent” by putting the concept out in the public domain.

Mr McLoughlin said the proposal put forward by PBP was “not a legitimate motion”, as it had not been delivered to the meeting via the appropriate deadline.

He said the variation to the development plan was put forward as a courtesy for councillors to engage in the process.

“Grange Castle zoning is 477 acres.  The Clonburris SDZ was 650 acres but there was public consultations, meetings, proposals for transport etc. This is probably the last rural area in Dublin West. We need more information before proceeding with this.”

Cllr Kieran Mahon (Solidarity) said the party’s proposal for Peamount Town had potential to double the size of homes required for people currently on the housing list in the county.

Sinn Féin Cllr Cathal King felt there was too much information for members to digest at short notice.

Labour Cllr Pamela Kearns said: “Unfortunately councillors have been stripped of their power by a previous minister, and we are reliant on the chief executive’s generosity for information.”

Mr McLoughlin stated the proposals were “clear” and had been discussed over the last 18 months at a range of different committee meetings.

He said it was consistent with the council’s policy of supporting economic growth, and he wanted to “proceed with this.”

According to the South Dublin County Council, the zoning change is to provide for sustainable expansion of enterprise and employment development on a strategic land bank to maximize existing and planned infrastructure in the area.

A South Dublin County Council spokesperson said: “In the general positive economic context, it is likely the sustained uptake of employment lands within the county will continue short to medium term and that further lands are required so as to ensure that there is sufficient large-scale serviced lands available to accommodate existing and new companies within South Dublin County.

“A review of the existing enterprise employment lands within South Dublin County demonstrated a lack of availability of serviced employment zoned lands with good transport links capable of accommodating significant projects of scale. A number of the well-established business parks within the county are nearing capacity, with limited availability for expansion or the addition of new operators.”