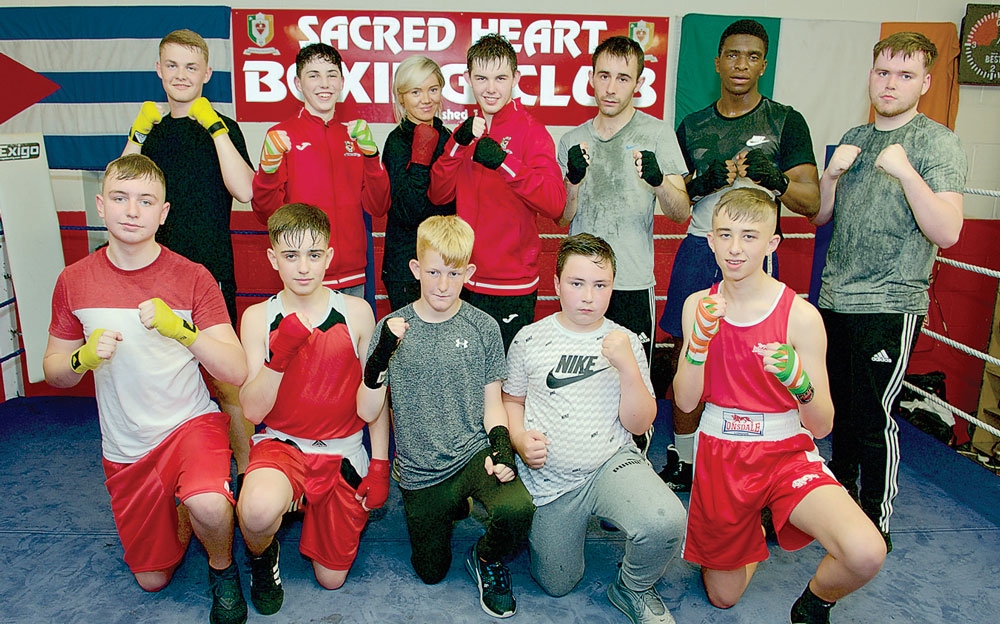 SACRED Heart Boxing Club is celebrating its 40th anniversary this year, having enjoyed a huge amount of past success with the chance of a lot more to look forward to this season.

Set up in Killinarden by Tommy Hanrahan and Tommy Finn back in 1979, the club has grown to cater for some 50 boxers in the clubhouse that they secured in Donomore Park some five years ago.

Some of Sacred Heart’s boxers in training on Tuesday evening.

The club was also helped in establishing its roots by a number of other committed workers, some of whom have sadly passed away, the likes former secretary Ted Cooling, club judge Joe O’Leary and coaches Liam Buggy and Peter Gaffney.

Today, Hanrahan is aided in the running of Sacred Heart BC by two of the club’s former boxers Robbie Stafford and Jason Kavanagh.

“I trained them when they were about seven or eight years old and now they’re coaching with me. We’re more like family than a club” said Hanrahan.

Both Stafford and Kavanagh are among the club’s list of former National senior champions and also joining them in the coaching line-up is former Avoca boxer Darren Hudson.

Hanrahan insisted there was a huge need in the community for a club like Sacred Heart back in the late 70’s, telling The Echo “Tallaght back in 1978/79 was fairly rough.

“There was a lot of trouble, but we’ve had some great kids in the club through all those years- four generations of them- and I can say 95 percent of those kids kept out of trouble. We’ve travelled the world, from Las Vegas, Chicago and New York to Auckland.

“We’ve been invited to a tournament next year in Dubai and this October we’re bringing 15 boxers to Las Vegas to take on a Mexican club, Centre Ring Club” he added.

Yet first up, on the domestic front, Sacred Heart will be weighing in four boxers into next month’s National Under 18 Championships, namely Craig Stafford, Patrick McDonagh, Eric Byrne and Martin Farhi.

The club will also be staging a Fun Run in Tallaght on July 27 to help raised funds for their trip to the US later this year.

The club trains four nights a week, from Monday to Thursday, from 6-7pm for children and from 7-8pm for adults.