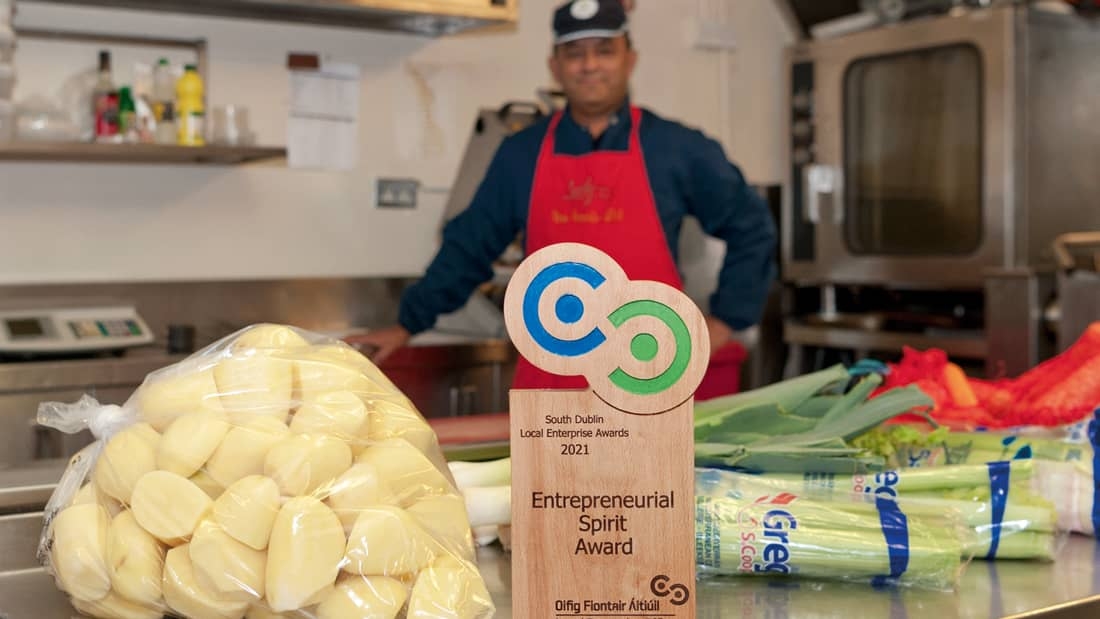 A SUCCESS story for local business and integration, Mohammed Rashid, CEO of Safco Fine Foods, has overseen an impressive upward trajectory for his vegan and gluten-free sauces and food - amid plans for expansion and further global export markets.

Established in 2012, Safco Fine Foods is the first commercial falafel producer in Ireland and they are in the process of opening a new production centre in Clondalkin, to compliment their existing premises in Cookstown, Tallaght.

“The new premises is four times bigger than Tallaght, from next week we will start production in Clondalkin Business Park,” said Mohammed.

“We will keep Tallaght for the food service product. The place is handy, close to town, good for ready meals, taco’s, we will keep two people there and will need at least six in Clondalkin.”

Mohammed will move between the two premises to oversee the day to day operation. He is the type of person who is always on the go and “never negotiate with quality” is one of his passionate rules for making food.

Safco products are currently available in Aldi and a number of other providers. The company website is currently getting a makeover in line with the growth of the venture which currently has staff of seven, and will be taking on another three employees.

Arriving in Ireland from his native Bangladesh in 1997, Mohammed worked at a restaurant in Galway and then in Dublin city centre, to running his own restaurant, in 2002.

During the pandemic, he reached out to the Muslim Sisters of Eire, a voluntary organisation dedicated to promoting integration.

“I found them on Facebook and throughout the lockdown they have been providing free meals for homeless people every Friday evening in front of Dublin’s GPO. I donate soups, wraps and veggie burgers.

“The worst thing is there is a lot of young children in the queue. At first there was up to 250 people in the queue, now there is over 500.”

Speaking to The Echo on Friday, Mohammed was preparing to hand deliver the latest care package off to the charity from the Safco kitchen.

Although describing himself as a “Lilywhite” due to living in Kildare, he “still supports the Dubs”.

“Every morning I am in Dublin but I sleep in Kildare.”

Meanwhile his son Meherab Rashid (13) is a promising back row player with Naas Rugby Club under-14’s, whilst Mohammed is also a member of the club and involved in the local school board management.

However, it is when talking about food that Mohammed really starts to wax lyrical espousing his passion for the craft and the history of falafel, in which he regales back to Palestine and then Lebanon, four hundred years ago.

“Every year I do an internship with UCD, and I tell them if I can’t give my food to my kids, how can I sell it to customers who pay your bill?

“Thankfully with the restaurant and bar there was not one complaint. But with a restaurant you only have the potential to reach a small percentage of 5-10,000 people. With this business you can look at a bigger customer base.

“Everything is 100 per cent gluten free, solely vegan. We don’t do anything else. Nothing comes from the outside, everything is fresh. When I was working as a chef, I researched and found you can charge extra if you have the right ingredients. In my 25 years as a chef, one thing you never negotiate with is quality. It takes time to grow, it is not a thing of money.”