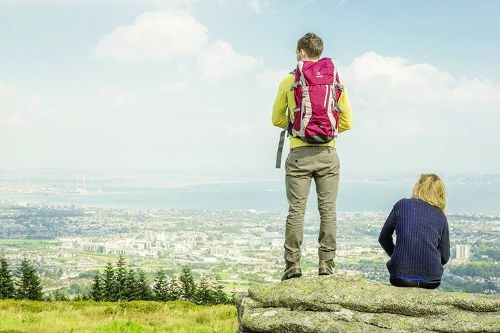 Scenic walk you must experience

Called the Dublin Mountains Way, the trail was officially opened in October 2010, with the entire route from Shankill to Tallaght now fully waymarked – and including familiar and popular landmarks such as the Hell Fire Club, Massy’s Estate, Cruagh, Tibradden (the Pine Forest), Kilmashogue, Ticknock and of course, the View Point.

A collaborative project between South Dublin County Council, the Dublin Mountain Partnership, Coillte, Dun Laoghaire Rathdown County Council and Dublin City Council, the trail has been listed in travel writer Barry Stone’s new book, 1,001 Walks You Must Experience before You Die – alongside famous routes such as the Appalachian Trail and Africa’s Rift Valley.

The Echo has also learned that South Dublin County Council is currently undertaking a feasibility study for the introduction of a flagship tourism facility along the route, which, while recognising the sensitivity of the landscape, will provide visitors with toilet facilities, a coffee shop, guidance and information.

Frank Nevin, Director of Economic, Enterprise and Tourism Development with the council, told The Echo: “Being listed in this book is in line with our Tourism Strategy, which identified outdoor activity, mainly the mountains, as a real tourism opportunity for South Dublin.

“We do recognise that the level of access needs to be examined and the Dublin Mountain Partnership, Coillte and the Dublin local authorities have already done a huge amount of work in this regard.

“We put a tender out, which closed last week, for a feasibility study into the development of a flagship tourism facility – which, alongside providing opportunities for maximum views, will provide a number of services to walkers.”

He added: “We have left the study pretty open and we hope that before our budget process in October or November that we will be able to give members an idea of the proposed facility and move the project on to an agreement and budget – with the planning stage hopefully starting next year.”

The Dublin Mountains Way, which is the only trail located on an urban fringe, with the walk only eight kilometres away from Dublin city centre, is listed among 14 other Irish trails including the Antrim Hills Way, the Burren Way, the Causeway Coast Way, Croagh Patrick Heritage Trail, the Dingle Way, the Kerry Way and the Wicklow Way.

Latest News: €2m forked out to construct cycle lane from village to M50

NEWER POSTDid you miss any of the main stories from the last week? Right this way…
OLDER POSTKiltipper Ramblers to promote walks and county tourism from charity event