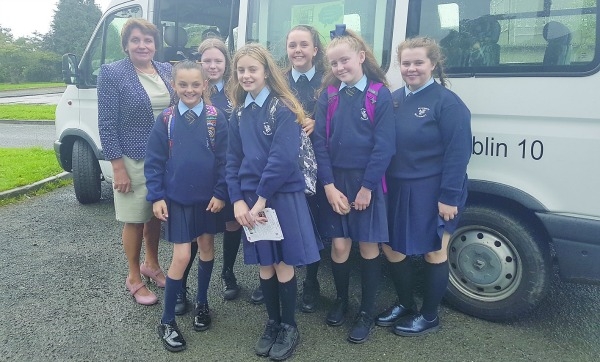 DUBLIN Bus strikes create anger and frustration for stranded commuters, but one Ballyfermot school has provided a solution to the problem, by providing students with a free bus service.

St Dominic’s Secondary School made alternative arrangements this week to ensure pupils didn’t miss out on their education on Thursday and Friday.

The school are providing a free minibus service on days when Dublin Bus’s fleets are in the garage.

Principal Mary Daly, said: “It was something we did years ago (previous strike). We have a lot of people living in different areas. Approximately 24 per cent of our students live outside Ballyfermot.

“A number of students approached me, asking what they will do (for the strike). We have a bus, if we could just get a driver, then we could facilitate a service.”

“We have strong links with BYS,” said Mrs Daly.

“It’s very important that you look after them. They shouldn’t lose out, or have their education affected because there is a bus strike.

“So we made alternative arrangements, and agreed three different stops. It’s a free service, delivered as a thank you to students for coming to school.”

Dublin Bus drivers are due to strike again this week on Thursday and Friday, over a dispute relating to a pay rise.

St Dominic’s are celebrating their 60th anniversary this year, and are in the process of organising a series of events to mark the historic occasion.