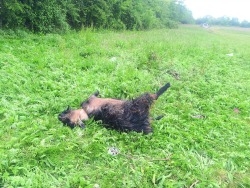 Scramblers spotted chasing goat before it was found dead

this week as they attended a call-out.
Members of the public contacted the My Lovely Horse Rescue charity after spotting youths chasing the goat around a local field known as Clonburris Little on scrambler bikes.
A spokesperson for the charity told The Echo that there were two goats in the field and there are now serious concerns for the life of the second animal.

She said: “Our team got a call to say that kids were chasing a goat in a huge field – we were told that the kids were doing it for drink money. When we arrived, the goat was dead and the body was warm. On the night, there were scramblers everywhere and people lamping (hunting) rabbits with dogs.
“A second goat is still in the field – he is with the horses, but is terrified. We fear that people will return and lamp/hunt the goat with their dogs, for fun. If not, chase it with scramblers for it to meet the same fate as the other goat.”
The rescue charity tried to catch the second animal on Thursday evening but it evaded the team which is now seeking advice from goat owners as to the best course of action going forward.
On the same evening that My Lovely Horse Rescue was called to the the area situated between the Fonthill Road and Outer Link Road at Adamstown the team found a badly emaciated, starving horse that needed treatment.
The spokesperson said: “She had been abandoned in the field. Her owner refused our help weeks ago.
“If this horse had received proper dental and veterinary care, she would not be in such a state. The condition of her teeth made it so that she couldn’t chew properly and gain nutrition from what she was eating.”
The charity warned that people across Dublin are regular abusing or not looking after their animals and that the problem is getting worse.
The spokesperson said: “People and kids are getting away with mistreating animals in Dublin. It’s time for it to stop.
“The local people of Clondalkin have been very helpful in trying to help us catch this goat and in helping us with horse rescues or letting us know about injured or mistreated animals.”
My Lovely Horse Rescue is run by volunteers, does not receive grants or funding and therefore relies on donations to continue.
For more information or to donate visit www.mylovely horserescue.com