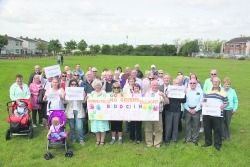 Save our green spaces

homes on green spaces in Maplewood and Ashgrove-Fernwood.
The two areas are proposed as locations, under South Dublin County Council’s Social Housing Strategy – which will see 444 new social houses built in the county.
St Mark’s Residents Association, say the proliferation of social housing on green space in West Tallaght is creating a “concrete jungle” which will fuel “mental health problems.”
The group feel let down by politicians, particularly after the development of 40 social houses in Maplewood eight years ago, and are asking questions about sustainable development and proper planning for the area.

Residents’ concerns were supported in an open letter by Tallaght Community Council last week, which highlighted an “unbalanced” distribution in the strategy.
TCC cited Tallaght and Clondalkin, as areas earmarked for 72 per cent of the proposed 444 social housing units.
Kathleen Ryan, Assistant Secretary of St Mark’s Residents Association, said: “Environment Minister Alan Kelly has asked the council to identify sites in West Tallaght. We would like to ask the Minister why West Tallaght, and why is every green space in built-up communities being taken away, leaving some areas with no green space at all ?
“When Springfield was built, it came with conditions, that our green spaces were never to be built on, as part of proper planning and sustainable development for the area. Green spaces are needed for safe playing areas for children, an amenity for residents, and for mental health and well-being of residents.”
Vice-chairman of the group, Jimmy Doyle, said: “Springfield is a private estate. We are paying our taxes and should be treated as such. Another major concern for residents is the allocation of rented accommodation in the area, which is creating problems.”
Fianna Fáil Councillor Charlie O’Connor, a Springfield resident, said the proposals have been “very upsetting” for the community, and raises a “range of issues.”
Cllr O’Connor said: “The zoning would be to preserve and provide open space and amenity, so suddenly, out of the blue, the council would decide to build social housing there. That’s the bit people don’t understand.
“A big issue is access. Residents are used to these areas being cul-de-sacs, and now they could be open to traffic. The Part 8 process is due to begin for Ashgrove in October and in January for Maplewood.”
A spokesperson for the South Dublin County Council said: “The Maplewood and Fernwood social housing proposals are not yet ready for the Part 8 consultation process until later in the year.”
Consultation process takes eight weeks, before going to a council meeting for approval, prior to submission of cost-plans to the Department of Environment.
St Mark’s Residents Association are currently seeking a meeting with the council.