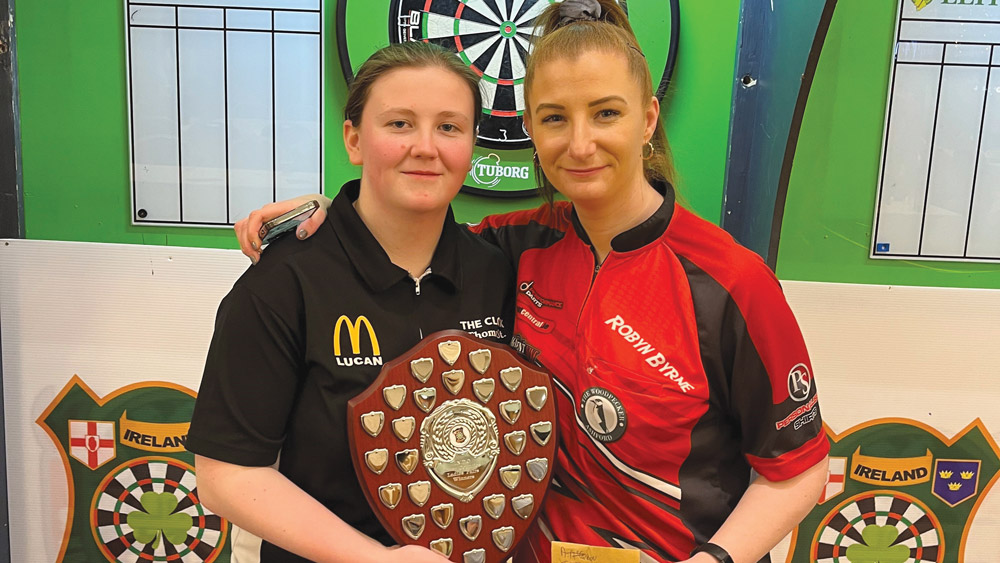 Sheldon set for PDC Series return after shining in All-Irelands

KATIE Sheldon will be looking to carry the superb form that propelled her to a near clean-sweep at the 2022 INDO All-Ireland Darts Championship into overseas competition later this month.

The Tallaght competitor recently returned home from the Knightsbrook Hotel in Trim with both the All-Ireland Women’s Singles and Doubles titles having also made it as far as the quarter finals of the team event with the Dublin Women side who were edged out 4-2 by Galway.

In what was an all-Dublin affair, Sheldon surmounted the challenge of Blanchardstown’s Robyn Byrne 4-1 to land the All-Ireland Singles title.

The Tallaght woman is now back-to-back All-Ireland champion having won the previous competition when it was last staged in 2020.

And, it was together with Byrne, that she secured the National Doubles crown after they beat Caroline Breen and Maureen Tiernan in the decider.

That marked the first time that she and Byrne had won a doubles title together and they secured it in emphatic fashion, dropping just one leg throughout the entire contest.

Delighted with her impressive haul at this year’s tournament, Sheldon said “You’re playing against some of the best players in Ireland and I was just absolutely delighted to have won it.

Sheldon will be returning to international competition at the end of the month when she contests the PDC Women’s Series before the PDC Development Tour follows a week later – both events taking place in Wigan.

She has more than held her own in the Women’s Series so far this year, recording two Last-16 and two Last-32 finishes.

“I was beaten by Aileen De Graaf and Rhian Griffiths who are two very good women’s players from the Netherlands and Wales, so I wasn’t too disappointed” she told The Echo.

“I was very unlucky. I played exceptionally well and was really happy with my performance, but was just that little bit unlucky.

“Going away, you might not always win, but you’re playing against very good players and when you come home, you can see that your game has gone up a notch” she insisted.