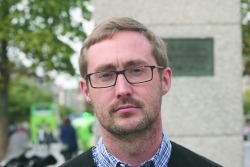 A LOCAL COUNCILLOR has described as “shocking” the revelation that Clondalkin and Lucan families with special needs children are left waiting years for crucial interventions including speech and language therapy, occupational therapy and psychology.

Cllr Eoin Ó Broin says the figures released in a Parliamentary Questions response from the HSE from a question tabled by Mary Lou McDonald TD have also revealed that the numbers of families affected and the waiting times are longer in Dublin Mid-West than in neighbouring Dublin South West, Kildare West/Wicklow and Dublin South Central.

Cllr Ó Broin told The Echo: “For some time I have been concerned about the length of time families with special needs children in Dublin Mid-West have been left waiting for diagnoses and crucial interventions for their children.”

He says that waiting times across the country are unacceptably high but the problem in Dublin Mid-West is “particularly acute”.

Cllr Ó Broin said: “When compared with neighbouring HSE areas the number of children on the waiting lists in Dublin Mid-West in higher and the average length of time they are waiting for these crucial services is significantly longer.

“Leaving a child for up to two years with no speech and language therapy can have a huge impact on their development. It also places an enormous emotional and financial strain on families who are left to fend for themselves.”

Cllr O’Broin says that the Rosse Court Resource Centre does not have the staff resources to meet the needs in the local community.

He added: “The same problem applies to the provision of special needs places in local schools. Without adequate funding to the HSE and to local schools families with special needs children will continue to be failed by this Government.”

It would also fund additional personal assistant hours and community based neuro-rehabilitation teams and transitional services.

The Echo contacted the HSE for a comment but they did not respond before we went to press.