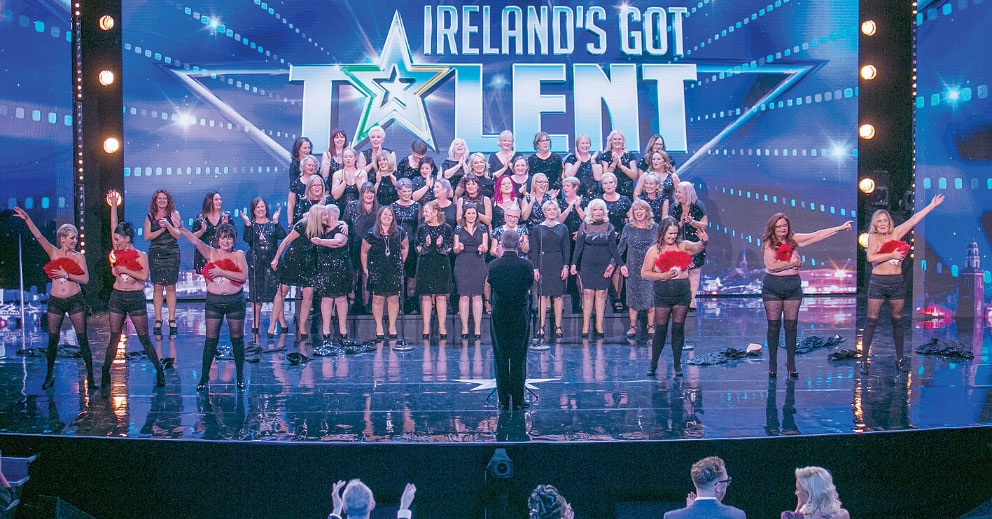 THE Sea of Change choir, consisting of women who are cancer survivors and supporters, will be taking to the stage for the semi-final of Virgin One’s ‘Ireland’s Got Talent’ on Sunday and are asking for people to submit the names of loved ones they’ve lost to cancer, as their performance will be in honour of them.

The choir, which has 42 members that range in age from 24 to 70, wowed audiences when they first appeared on ‘Ireland’s Got Talent’ last month and performed a powerful rendition of ‘This Is Me’ from ‘The Greatest Showman’.

A number of the choir members then gave a stunning ending to the performance – they stripped off in a showing of body confidence, and they secured a golden buzzer from judge Denise Van Outen, moving them straight through to the semi-finals of the competition.

Old Bawn woman and breast cancer survivor Linda Flood (44), who’s in the choir alongside her sister Barbara Kelly, told The Echo: “We had a lot of chats after choir about what we’re about – raising awareness of [children’s cancer charity] Aoibheann’s Pink Tie and cancer.

“Most people go into these shows for the fame, but that’s not for us, we want to raise money for Aoibheann’s Pink Tie and show that there’s life after cancer.

“If we win ‘Ireland’s Got Talent’ then the majority of the money will go to Aoibheann’s Pink Tie to facilitate a new respite house for them.”

The choir, which has members from areas all over the county including Tallaght, Clondalkin and Lucan, are now looking ahead to their live performance in the semi-final of the competition on Sunday, and are asking people to submit the names and ages of their loved ones through the choir’s website – as the song will be in tribute to those who died as a result of cancer.

Linda, who works as an accounts assistant in AbbVie in Citywest, said: “It will be an honour and a privilege to perform on Sunday.

“I myself had breast cancer, and through my journey I met other girls in the chemo ward and two of them died, so the performance will be very emotional – we’ll be celebrating living and also thinking about the people who have passed.

Names and ages of loved ones who have passed away as a result of cancer will be accepted on the choir’s website, at www.seaofchangechoir.com, until Sunday morning, and while Linda has to remain tight-lipped about what the performance will contain, she confirmed that the names will be a feature of the performance.

“I can’t say what we’ll be doing,” explained the mother-of-three, “but the names will be a prominent part of the act and the song will be about them.”