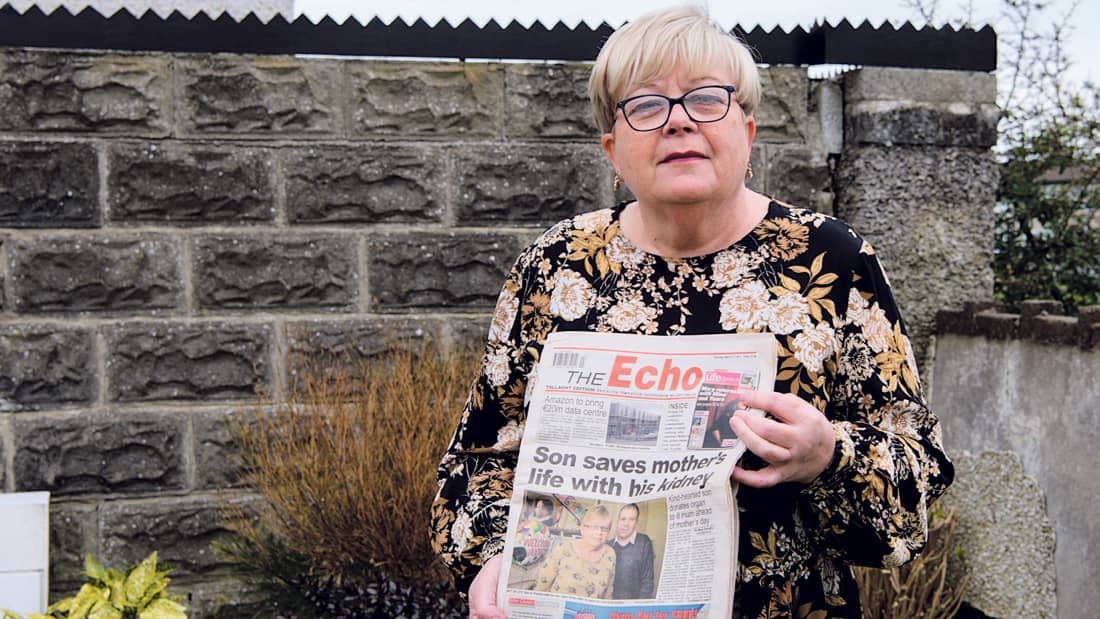 Bernie Sharkey received the ultimate Mother’s Day gift in 2011 when her son Brian gave her the gift of life by donating his kidney to her.

Ahead of the 10 -year anniversary of the kidney transplant on March 22, 2021, Bernie says her kidney is at ‘one hundred percent’ and she is now living life to the fullest.

“I had kidney failure and I was on dialysis four years prior to getting the kidney. My son was tested, and he was a perfect match.

“The real day came then on March 22, 2021 and Brian went into surgery prior to me, they took the kidney from him and then I went down, and they brought me into surgery, and I got his kidney.”

The kidney transplant surgery was a success and Brian returned home four days after, with Bernie returning home six days after.

“We recovered slowly, it is a slow recovery, but we recovered very well and thankfully we are here to tell the tale,” Bernie told The Echo.

Ten years on, Tallaght native Bernie and son Brian, are living healthy and full lives without any health worries.

“I have had great health, no problems with my kidney. My kidney is functioning one hundred percent – I only had a check there a couple of weeks ago in Tallaght Hospital.”

Bernie’s son Brian, now living in Scotland, says his health is brilliant and never thought twice about giving the kidney.

“It was just one of them things I suppose. I am very lucky to have a great family and we are very close. I didn’t really see it as a big deal to be honest with you.

“My health is brilliant. I have always been involved in sport and I still play sport and have been a really keen runner for probably two years now.”

To mark the anniversary, Brian is running a 40 mile ‘ultra-run’ on March 21 to raise funds for Beaumont Hospital.

“It is just a way of saying thanks, the support we got in there was phenomenal to be honest with you.”

During her four years on dialysis, Bernie says she was restricted as she had to be at home every four hours for home dialysis.

“It restricted my lifestyle and my movements, it restricted everything. I was confined to my home every four hours. Now, I am as free as a bird and I do not have to worry about anyone calling with bags of fluids, I haven’t looked back since really.”

In addition to a new kidney and a new lease of life, Bernie also gained a special friendship with a man, Pat, who she met in Beaumont Hospital when getting her transplant.

“I was in Beaumont hospital it was a mixed ward for men and women, and there was a man in the bed beside me. We grew a very good friendship, and we are the best of friends ever since. I know his family very well they have been up to us and we have gone down to them and he is a great friend of the family. He has his surgery the same day as me as well, and he is doing really well.”

Bernie says she will be ‘forever grateful’ for the gift of life she received from her son, and the support she received during the tough time.

“I can never be thankful enough for what he has done for me and for the whole family because I mean, it was a very tough time for the family – the two of us in theatre at the same time.

“He is a fantastic child and it just meant the world to me, to give the gift of life, – what do you say?

“I am so thankful for Beaumont and for the aftercare in Tallaght, I go to Tallaght every three months to check bloods and to make sure everything is well and good. I am after getting a second chance in life that I would have never gotten.”