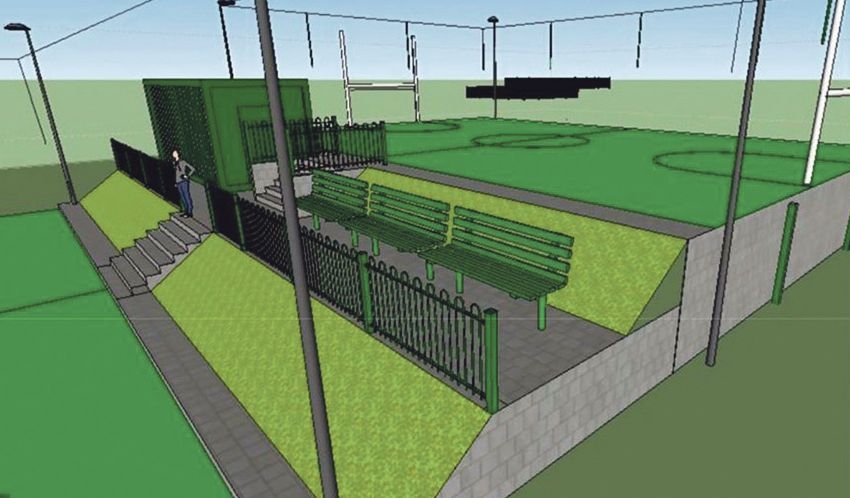 SEVERAL sports clubs and community groups in Kingswood have joined forces to push for four abandoned tennis courts in Tynan Hall Park to be transformed into a sports hub that everyone in the community can use for a variety of different sports.

Kingswood Castle FC, Kingswood FC, St Kevin’s-Killian’s GAA, the Kingswood Residents’ Association, and Kingswood Community and Leisure Centre have come together to form a committee for the development of a sports hub at the tennis courts in Kingswood.

Artist’s impression of the sports hub

As reported in The Echo last December, over 300 local residents signed a petition backing the proposal, as many felt that there was a lack of sporting facilities in the locality.

Sharlene Kennedy, the chairperson of Kingswood Castle FC and of the sports hub committee, told The Echo: “The tennis courts are disgracefully bad – they’ve been left sitting there for years.

“What we want to do is develop a sports hub at the tennis courts, but it will be for complete sport inclusion – not just for one sport.

“I think a sports hub would be a big addition to the area, because it’s so important to provide the whole community with somewhere where they can go to train, and where they can keep their minds and themselves busy, active and healthy.

“Having those tennis courts there is a waste, when that space could be so much more community inclusive.”

There are currently 13 different sports teams in the Kingswood area, but none of the teams have permanent facilities.

Last May The Echo reported on the lack of toilet and changing facilities for players from the local GAA club, St Kevin’s-Killian’s GAA Club.

Ms Kennedy added: “The proposal will not change the current footprint of the courts.

“It will change the black tarmac to a green artificial grass surface with secure locking gates that currently it does not have.

“It will stop the anti-social behaviour as it will be locked at night and maintained by the locals involved.

Artist’s impression of the sports hub

“It will allow a wider variety of balled sports and outdoor activities throughout the year regardless of the weather.”

A spokesperson for South Dublin County Council was contacted for comment, but a response was not received in time for print.