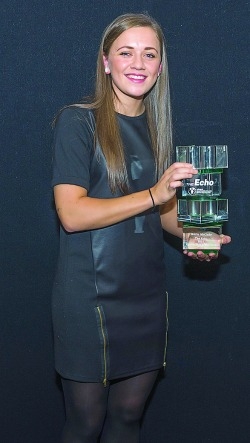 Sports Person of the Year

NOT many competitors can spend four months of the year sidelined with a broken leg and still cap-ture a Sports Star of the Year Award at the end it.

But the fact that young Ireland soccer sensation Katie McCabe managed to achieve just that at The Echo 2014 Amateur Sports Awards Night in the Glashaus Hotel is testament to her tremendous talent at both club and international level.

Sustaining her injury after having fired home a hat-trick for Raheny United in their 5-0 demolition of Cork Women’s back in February, the Tallaght woman returned to action in June when she lined out for the Republic of Ireland Under 19s in a friendly against Norway.
After bagging a second National League medal she helped Raheny through to the last 32 of the UEFA Women’s Champions League after they won all three of their group games, beating Romanian hosts Olimpia Clug, Bulgarian side NSA Sofia and Hibernians from Malta.