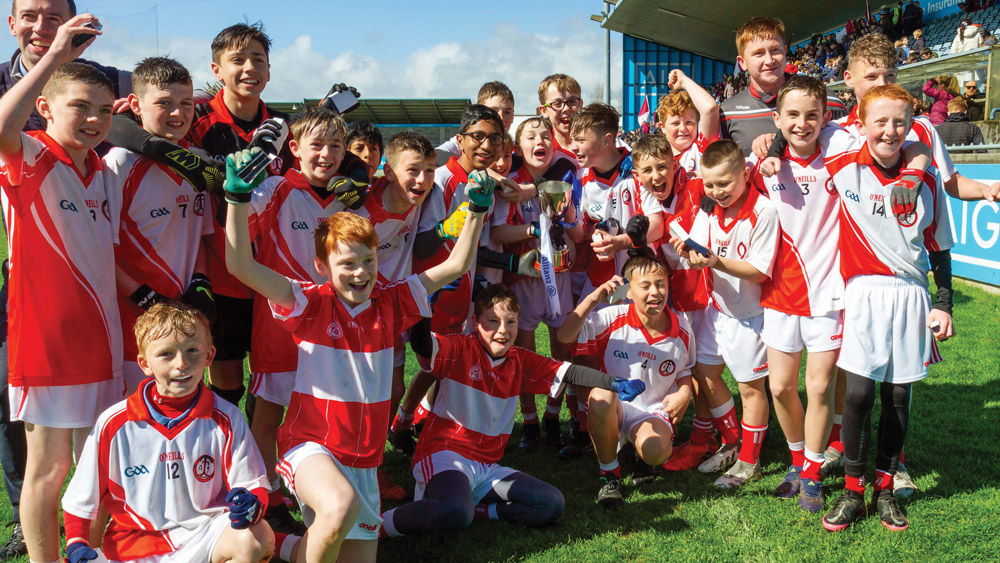 The Palmerstown school wasted little time in getting on the score board as David McPhillips saw his attempt bounce to the net just a minute into proceedings.

Finn Garner followed up with a point and was very unlucky not to add a goal soon after when his effort nestled in the back of the net only to be ruled out – the match official citing a square ball in the build-up.

A huge downpour made for a high amount of handling errors by both sides, but St Lorcan’s did managed to extend their lead to 2-1 to 0-0 by the halftime recess then Brodie Boyle squeezed his strike to the goal, despite the St Canice’s netminder getting a hand to it.

At the other end St Lorcan’s were bolstered by the superb performance of their two cornerbacks Ken Irwin and captain, Ancel Jobi, while goalkeeper Harry Pierce proved very influential in terms of his shot-stopping and precise kick-outs.

The deficit continued to increase in the second half with Robert O’Hanlon finding the roof off the net in what was the goal of the match.

Bobby guy weighed in with a great point while both Justin Mariner and Aaron Vickery turned in huge shifts at midfield, the latter playing through with a slight muscle strain.

Daniel Gargan, McPhillips and Callum Healy were proving most industrious and substitute Lennon Keogh also made his presence felt when he was sprung from the bench, shooting home to the bottom corner to effectively make certain of the victory.

It was a hugely significant game for the Palmerstown school as it marked their first Cumann na mBunscol final in a decade and their first title win in the competition for some 12 years.