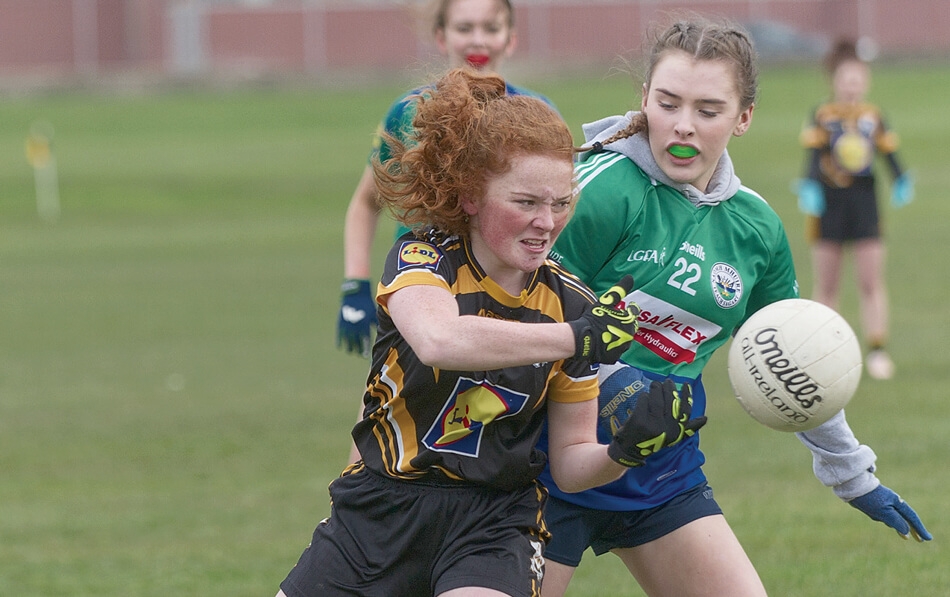 McGEE Park provided the backdrop to a 17-goal thriller on Saturday afternoon as St Mark’s ran out 10-6 to 7-8 winners against St Mary’s in their Dublin Ladies Football Under 18 Division Six clash.

Despite the drastic effect that the wind had on the match, both sides brought their A-games with Aoife O’Leary the standout for the hosts, tallying 5-1.

However, it was the Saggart outfit that started the stronger, capitalising on the favourable wind to keep Mark’s pinned inside their own 45-metre line.

Bronagh O’Mahony shone for the Saggart side at full-forward, doing all the work in the lead-up to their first goal as she beat two defenders down the right wing before finding Leah McConville, who punched the ball to the net.

The Springfield side worked tirelessly to make their way upfield through O’Leary and centre-back Abigail Williams, but they could not find their range in the face of the strong wind.

That was until Williams, the captain, collected Lauren Benim’s kickout deep inside her own half and made up 80-metres to combine with Caitlin Carwood and set up corner-forward Katie Lynch for a tap-in to an open goal.

Mary’s went straight back down the other end as the dynamic Brianne Flood took a point and then buried the ball into the bottom corner from the resulting kickout.

The midfielder showed great ability to win her own ball, beat a player and knock it over the bar and she did so eloquently from 40 metres before Emma Conroy added Mary’s third goal.

Luck seemed to be against Mark’s in the opening half when Hazel Byrne hit the post twice from two different moves, but O’Leary rose to the occasion to get her side back into the race.

After hitting the post twice earlier, Hazel Byrne finally found the right side of the woodwork and the comeback was bolstered when Aoife O’Leary fired home twice in succession before the interval.

Mary’s led 3-4 to 4-0 by the half-time break and were facing a tough second half with the wind in their face.

It was the talented O’Leary who opened her side’s points-account straight after the restart before swiveling onto her right to fire over from distance.

Similarly, to how she provided Byrne’s goal in the first, Williams ran the length of the field, but this time went herself before Jessie Oigbochie smashed the ball across goal to the top left corner.

An O’Leary penalty, a quick 1-1 salvo from Williams and a Carwood point pushed Mark’s into a healthy lead.

O’Mahony, just six-months after breaking her ankle, brought Mary’s back into contention with a rousing 1-3 as the clock ticked down.

The troops rallied behind their star forward with corner-forward Emma Conroy bagging a brace of goals in quick succession while Flood notched up an additional 1-1.

O’Leary was relentless in midfield for Mark’s and she twice more found the net before Carwood also fired home and Byrne pointed to round off a hard-fought triumph.