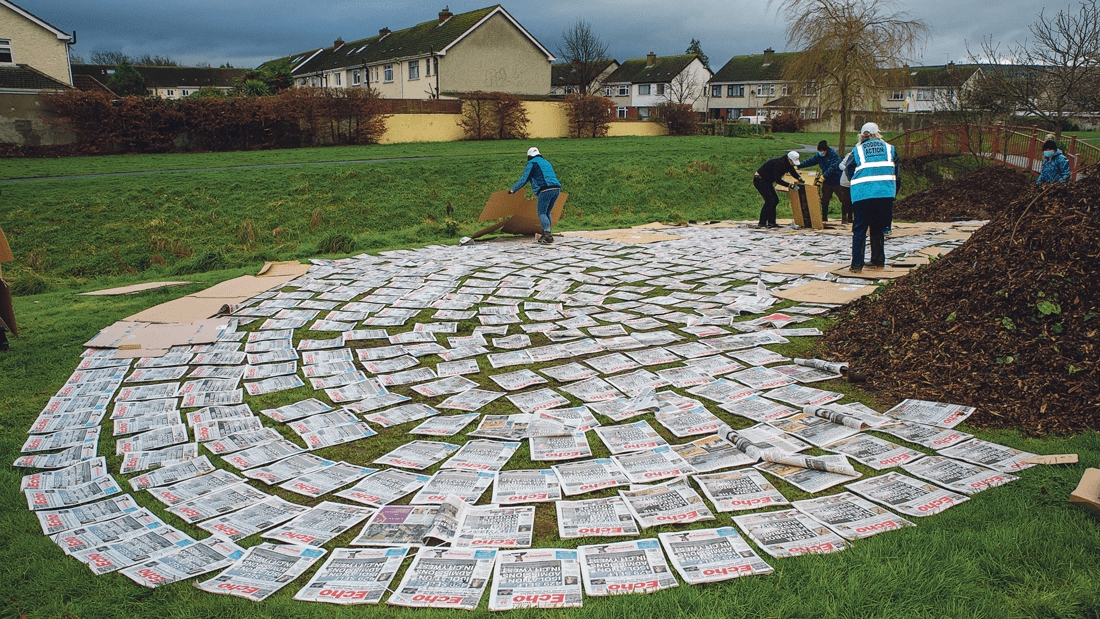 Stepping stone forests will be living testament of community

THE first step in the creation of three stepping stone forests in Sean Walsh Park in Tallaght took place on Saturday, when a team of over 20 volunteers carried out soil preparations.

The socially-distanced soil preparations saw the volunteers, including local politicians Sean Crowe TD, Francis Noel Duffy TD, Cllr Teresa Costello and Cllr Alan Edge, lay out over 3,000 old copies of The Echo, and bales of cardboard donated by Cycle Superstore, into the soil.

Volunteers laying out The Echo in Sean Walsh Park

The paper and cardboard were then covered by a thick layer of woodchip mulch, provided by South Dublin County Council, all of which will prepare the land for tree planting next March.

The project is being spearheaded by local environmental group Litter Mugs, after the council gave them the go-ahead after they proposed the idea for the densely-packed, fast-growing forests earlier this year, volunteering to provide the manpower if the council provided the land.

“The weather wasn’t too bad, and everyone got really stuck in. It was a great community effort.

“Laying out the copies of The Echo and the cardboard was relatively easy, but the tough stuff was moving the woodchip mulch – it was hard work.”

It took the 24 volunteers three hours to carry out the soil preparations on Saturday morning, and now it’s expected that the soil will heat up and ferment the cardboard and newspaper, leaving the soil ripe for planting native trees next spring.

Volunteers laying out The Echo in Sean Walsh Park

Mr Kiberd added: “It’s nice to do this collaboration between the council and the community, and I think everyone knows the environmental value of trees.”

The team of volunteers are also eager to be involved in the planting of the trees next year, according to Mr Kiberd.

When the pocket forests are complete, Mr Kiberd said they will be “a living testament to and monument of the community”.