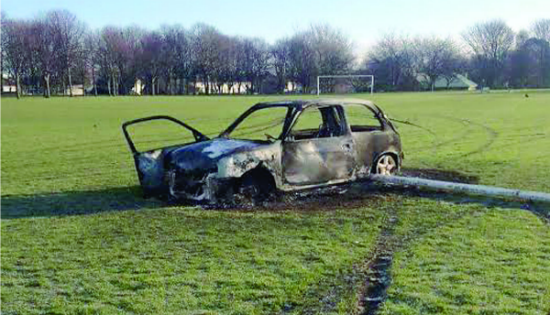 Stolen cars cost thousands of euro in damage to park

THE amount of stolen and burnt-out cars discarded in recent weeks at parks in Drimnagh and Crumlin, has taken Dublin City Council “by surprise.”

Cars were burnt out in Brickfield Park and Stanaway Park last week, along with another burnt-out car at the Clonmacnoise roundabout in Crumlin.

Brickfield Park suffered considerable damage to its football pitches last week after what looked like a stolen Micra, drove in past security boulders and caused havoc, leading to calls by local representatives for improved security.

“It’s infuriating, mindless and unacceptable. The protection of Brickfield Park is paramount. There is no magic wand but we need to secure these gates,” said Cllr Doolan.

“This is the site where we hope to spend up to half a million on a new full-length astro-pitch, which will go above and beyond for the wider community, but there are concerns now that this will be in jeopardy.

Cllr Doolan continued: “The welding to fix the gates was robbed. I asked and was told it was the only welding equipment in the area. If it was a comedy you would laugh, but it’s serious. The boulder wasn’t measured properly and they can get in around the boulder. Kids are preparing for the new season and can’t use the pitches.”

Doolan passed an emergency motion urging Dublin City Council to improve security in the park at the Dublin South Central ACM, and has appealed for members of the public to report any information they have to gardaí.

“Those responsible are attempting to destroy our park. We must ensure they do not succeed in stopping young people using this park,” he said.

Bruce Philips, Dublin City Council Area Manager for Dublin South Central said the park was “relatively free of stolen car incidents for the last 10 years” but the incidents have “taken us by surprise.”

Mr Philips said: “There were two events last week in Brickfield and Stanaway Park, causing several thousands worth of damage. We are reviewing security to ensure no stolen cars can get in.

“It won’t be possible to fix the damage to the pitches straight away. Repairs will take weeks, possibly a couple of months when the weather gets warmer.”